Wenger rails against ‘dark ages’ refereeing after clash with Dean 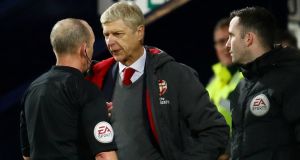 Arsène Wenger has revealed his exasperation at limelight-seeking Premier League referees, reminding them of their responsibility to promote the spectacle rather than oversee something from the “dark ages”.

Wenger railed at their inconsistency, claiming they “don’t look to have the same rulebook”, while he bemoaned the lack of clarity from the top, regarding the implementation of the laws. He dismissed the visits that referees pay to the clubs as not worth bothering with, “because they never respect what they say” during matches, and he advocated a system in which officials could be relegated for poor performances.

The Arsenal manager faces his second touchline ban in 12 months – which could be extended to incorporate a suspension from stadiums – after he clashed with Mike Dean in the referees’ room on Sunday following the 1-1 draw at West Bromwich Albion. He has been charged by the Football Association with using abusive language or behaviour and has until 6pm on Friday to respond.

Wenger had been incensed by Dean’s decision to award a last-minute penalty for handball. The former Arsenal player Kieran Gibbs struck the ball at Calum Chambers, who argued he could not get out of the way, and Jay Rodriguez scored the equaliser from the spot.

Wenger was still smouldering yesterday at his press conference to preview the visit of Chelsea on Wednesday night, and he offered his most inflammatory soundbite when he was asked whether he had been given an explanation from Dean about the penalty. “No, he saw what he wanted to see and we have to deal with that,” Wenger said.

The FA takes a dim view when it believes the integrity of a match official has been questioned and is expected to ask Wenger to explain himself. It is possible the FA could charge him over his comments but it would be a separate – and less serious – matter to his bust-up in the referees’ room with Dean. Charges that arise from remarks in the media tend to result in fines.

Wenger was given a four-match touchline ban in January last year following his altercation with the fourth official Anthony Taylor at the end of Arsenal’s 2-1 home win against Burnley. He was also fined £25,000. Wenger had been sent to the stands when he put his hands on Taylor, which is one of the most serious offences in the FA’s eyes. Taylor is the referee for the game against Chelsea.

The FA will take into account the fact the post-West Brom flashpoint with Dean represents Wenger’s second offence in less than a year and, as such, it is likely he will be suspended from the touchline. It would be within the governing body’s gift to impose a stadium ban.

Wenger had said in early December he was impressed at how Daniele Orsato refereed the Serie A game between Napoli and Juventus. “If you want to analyse well, watch the difference between them and us [in the Premier League] and then you will see,” he said. Wenger was asked to elaborate on those comments. “He made quick, clear decisions and he showed an authority to get the game respected. Sometimes I say to the fourth official, when the goalkeeper starts to waste time after five minutes: ‘There are people who pay a lot of money to watch football. You are responsible to make sure football happens on the pitch.’ They have to serve the game, like we do. They have not to be the star.

“It’s not [appropriate] any more, in 2018, that the referee calls a player and speaks to him for half a minute or a minute. That is the 1950s, where the referee talks to the player and says: ‘If you’re not nice, I might punish you.’ Come on, let’s not waste time. That is not the rhythm of a modern society. People want crisp, sharp action, and the referee has to make sure that happens. We don’t live in the dark ages.”

Wenger has selection problems for the Chelsea game, particularly in defence, with Sead Kolasinac and Nacho Monreal (both ankle) out and Laurent Koscielny (achilles) a major doubt. Mesut Özil (knee) is also doubtful while Aaron Ramsey and Olivier Giroud (both hamstring) remain unavailable. But Wenger was more interested in the topic of referees.

He described it as a “concerning coincidence” that Arsenal had, to his mind, suffered bad decisions in away matches this season against Stoke City, Watford and Manchester City, as well as West Brom. He neglected to mention how Albion were denied a penalty at Emirates Stadium, Shkodran Mustafi’s offside goal against Tottenham and Aaron Ramsey’s winning of a soft last-minute penalty at Burnley.

“It’s unbelievable what has happened this season,” Wenger said. “Have they been the worst decisions of my 21 years at Arsenal? No. We had some good decisions at Old Trafford. The referees should spare that visit to our training ground and stay at home, because they never respect what they say. They gave a clear directive on handball but that changes, always, during the season because they must watch the television and say: ‘Oh, he has given a penalty – maybe next time, I do it.’ They need a clear guidance.

Wenger was asked whether certain referees had egos and craved attention. “We want them to respect the game and make the right decisions and the ego should not interfere in that. After, does it happen? Maybe, I don’t know. It is just surprising sometimes that at that moment of a game this decision can happen. Maybe he [Dean] might explain it one day.” – Guardian

1 Dave Hannigan: Trump gets the clubs back out as death toll keeps rising
2 Safe return to play in New Zealand showcases the true value of sport
3 Dr Bob Rotella: ‘If you focus only on the target you’ll play darn good golf’
4 Zoom calls with Rory and the GUI bake-off: Neil Manchip keeping the flag flying
5 Munster braced for worst of financial crisis due to Thomond Park debt
Real news has value SUBSCRIBE