Robbie Keane could be set for Wolves return, reports 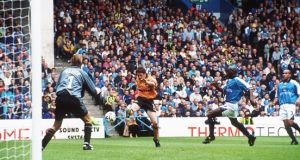 Robbie Keane scores the winner for Wolves against Manchester City in the second flight in 1999. Photograph: Inpho

Robbie Keane is reported to be on the verge of a return to his first senior club, Wolverhampton Wanderers, with the Dubliner said to be keen on rejoining the side where he made his name as a teenager before, most likely, retiring in the summer.

The 37-year-old is currently playing in the Indian Super League with champions ATK but in England, the Daily Mirror claims that Wolves boss Nuno Espirito Santo is hoping to add the Dubliner to a squad that is currently 12 points clear at the top of the Championship, with the Portuguese said to feel the veteran striker could still make an impact on the team, perhaps coming into games late on, while using his vast experience to help younger players to develop.

Wolves have comfortably outscored all of their Championship rivals this season with Leo Bonatini and Diogo Jota having got 23 league goals between them and the club has just signed 20 year-old striker Rafael Mir from Valencia on a four-and-a-half year deal for an undisclosed fee.

The suggestion is, however, that Keane, who has scored two goals in four appearances for an ATK side that is thus far well off the pace in the Super League would help the team copper fasten its grip on promotion back to the Premier League.

It is understood Keane would be happy to make the move and is in a position to secure the termination of his contract in India in order to secure a return to the club where he made his senior debut 20 years ago, aged 17. Keane scored 24 goals in 72 games at Molineux before being sold to Coventry City for £6 million, then a British record fee for a teenager.

There has been some scepticism expressed that ATK would let him go as they struggle to get their title defence into gear - his two goals make his the team’s top scorer after eight games - or that Wolves would really be prepared to fund his return when they are already in such a strong position. However, the move might certainly appeal to a player anxious to finish his career on a high and, perhaps, help him move into coaching closer to home after the years he has spent in the United States and now India.