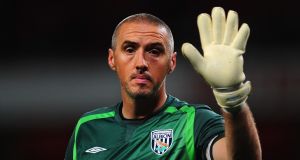 Goalkeeping coach Dean Kiely is to leave Preston and join Crystal Palace in the same role, the Championship club have announced.

The former Republic of Ireland goalkeeper joined North End in October but will now make the switch to Roy Hodgson’s Eagles, who are currently 14th in the top flight.

Kiely has previously worked under Hodgson at West Brom.

In a statement on their official website, Preston said: “In an interim period Academy goalkeeping coach Jack Cudworth will move up to work with the first team goalkeepers at the club, whilst manager Alex Neil decides on the long term plan in that area of the coaching staff.

“The club would like to thank Dean for his contribution in his time with the club and wish him all the best in his future career.”