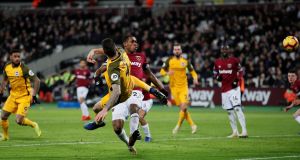 The Hammers were staring at a fourth loss in four meetings with Brighton since they were promoted after goals from Dale Stephens and Republic of Ireland defender Shane Duffy put the visitors in charge.

But two goals in two minutes from Austrian forward Arnautovic lifted the hoodoo as West Ham snatched a 2-2 draw.

All the goals came in the space of 12 second-half minutes of a contest which came to life after Brighton struck from two corners.

The Seagulls made the breakthrough in the 56th minute, when Lukasz Fabianski punched a corner straight to the lurking Stephens who smashed the ball back through a mass of bodies and into the net.

Hammers boss Manuel Pellegrini threw on Mark Noble and Michail Antonio, meaning new signing Samir Nasri would not be leaving the bench for his debut.

The changes had an immediate effect as Arnautovic pulled one back when he latched onto Noble’s ball over the top, held off Duffy and expertly finished past Button.

Moments later Antonio reached the byline, just managing to keep the ball in play, before pulling it back for Arnautovic to smash home off the underside of the crossbar.

Declan Rice, yet to open his account for the Hammers, hit the sidenetting as Brighton, in total control just 25 minutes earlier, found themselves gratefully clinging on for a point.

Troy Deeney’s early brace had Watford 2-0 to the good, before Nathan Ake and Wilson had Bournemouth level – but for less than a minute.

Ken Sema fired in from Deeney’s knock-down to nudge Watford into a 3-2 lead, but one the Hornets could only hold for two minutes.

The excellent Fraser’s composed finish drew Bournemouth level at 3-3 before half-time, and despite a clutch of Cherries chances after the break, so the scores remained.

Four goals in six minutes lit up the tail-end of the first-half, with Deeney taking his top-flight tally to five for the campaign and Wilson claiming his ninth in the league for the hosts.

Despite the full-throttle goal action however, neither manager would have been happy with the draw.

Watford boss Javi Gracia would have expected his men to kick on having coasted into their early lead, while Eddie Howe is keen to nudge Bournemouth into better league form after just two wins in 11.

Deeney’s two goals in 13 minutes initially appeared a worrying omen for a stunned Bournemouth, who let the Hornets run them ragged early on.

Watford’s bullish skipper then had the Hornets in control, side-footing home after Gerard Deulofeu seized on Dan Gosling’s loose pass to race through the middle.

Watford’s early goal glut was summarily eclipsed though, as Bournemouth hit back as the back-end of the first-half descended into a free-for-all.

Ake nodded in after Ben Foster palmed away Gosling’s head from Fraser’s free-kick.

Just a minute after that, Sema thumped in from Deeney’s knock-down, to put Watford back in front at 3-2.

But then, a mere two more minutes elapsed before Fraser drew Bournemouth level for the second time in the match, at 3-3.

Junior Stanislas’s low ball sneaked all the way from right wing to inside left in the Watford box, with David Brooks, Wilson and Josh King all stepping over.

And when the ever-alert Fraser finally latched onto Stanislas’s ball, he steadied himself and swept calmly into the net.

Madness almost complete then, save for King still finding time to head wide from a smart Stanislas cross.

Ashley Barnes’s second-half winner clinched Burnley a 2-1 win at 10-man relegation rivals Huddersfield and lifted them out of the bottom three.

Barnes notched his fifth goal of the season after Chris Wood had cancelled out Steve Mounie’s first-half opener for Huddersfield, who slumped to a club record eighth straight defeat.

The home side battled bravely despite being a man down for the entire second period following Christopher Schindler’s dismissal for two yellow-card offences just before the break.

Burnley also ended with 10 men after substitute Robbie Brady’s straight red card for a cynical challenge on Isaac Mbenza in the closing stages.

The Clarets’ first league win on the road since the end of September lifted them up to 16th in the table and crucially dealt Huddersfield’s survival chances a major setback, leaving them rooted to the bottom, eight points from safety.

Jordan Ayew and Luka Milivojevic, from the penalty spot, scored in the final seven minutes to ease Palace’s goal woes.

The Eagles’ loan pursuit of Liverpool’s Dominic Solanke looks over with doubts over his fitness while Wilfried Zaha stretched his goal drought to 14 games.

Wolves are chasing Chelsea’s Tammy Abraham, currently on loan at Aston Villa, and both teams showed why they needed fresh firepower in a forgettable game.