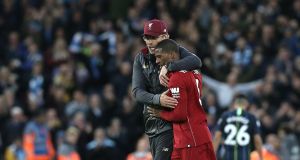 In every title-winning team there is a player whose crucial contribution is largely overlooked by the wider public. A subtle operator among the standout performers who generates few headlines and even fewer accolades. But the fans love him, as does the manager, because they know without him there would be no success, no glory, no shiny silver trophy in the middle of May.

It is too early to decide who that figure is in Liverpool’s current side, mainly because it is too early to say for sure that Liverpool are going to win the title. But ahead of tonight’s potentially pivotal game against Manchester City there is, it seems, a standout candidate.

He has featured in all but one of the leaders’ league fixtures this season and been central, literally as well as figuratively, to everything that has gone right for Jürgen Klopp’s side.

Yet praise has not come his way, certainly not compared to that which has been received by many others in red. He is the near-invisible man in English football’s most striking team right now and his name is Georginio Wijnaldum.

Put simply, without Wijnaldum there would be no unbeaten run, no string of clean sheets and no stream of goals for the current pace-setters.

He more than anyone has stitched together Liverpool’s excellent defence with their excellent attack and is a certainty to face City in the Merseyside club’s biggest game since May’s Champions League final.

Klopp confirmed as mh by substituting the Dutchman with 12 minutes of Saturday’s 5-1 victory over Arsenal remaining. It was a clear case of “rest up for Thursday, Gini” after yet another superb display from Liverpool’s No 5, and as he departed from the pitch there came a standing ovation from the home crowd, followed by a blast of the Wijnaldum song. They’ve been singing it for some time at Anfield.

It has not been easy for Wijnaldum since he joined Liverpool from Newcastle for €28m in July 2016. Indeed, there was a level of scepticism to his very arrival given the player’s generally underwhelming displays for a Newcastle team that were relegated during his one season on Tyneside.

He scored 11 goals in 38 league appearances, an average total for an international attacking midfielder, and particularly so given all of those goals came at home, with four arriving in one game – against Norwich.

But that did not deter Klopp, primarily because he recognised there was more to Wijnaldum than meets the eye.

“He can play a few positions and players that come through the Dutch system usually have a good tactical understanding,” he said upon acquiring the player, and increasingly the 28-year-old has vindicated his manager’s belief in what he can provide the team.

Under Klopp, Wijnaldum has operated in both a two-man and three-man midfield, most often as a playmaker but also, on occasion, in a purely defensive role.

The emphasis has shifted from scoring goals to providing and preventing them as required in a system underpinned by hard-running and aggressive counterpressing.

It’s a lot to take in and, understandably, Wijnaldum initially struggled to adapt. But as his displays this season have shown, Klopp was right to believe that the man who captained PSV Eindhoven to the Eredivisie title in 2015 had the required aggression, stamina, work-rate, discipline, assurance in possession and all-round football intelligence to do so.

Wijnaldum has completed 90 minutes for Liverpool on 18 occasions this season, including five of their six Champions League games. The only league game he has not been involved in was the 3-1 victory over Burnley last month and that was as part of a host of changes made by Klopp in order to keep his key men as fresh as possible.

Practically ever present, the Netherlands international is also Liverpool’s best midfield performer in a number of notable areas, including most completed passes (906) and most completed dribbles (12 out of 19), showing his ability to not only keep Liverpool’s attacking momentum’s ticking over but also drive it forward.

“Gini can switch from one mindset to the other and that is pretty good for us,” said Klopp of the player in August before going onto describe him as “outstanding” in the win over Arsenal.

He certainly was and what makes Wijnaldum’s form throughout the season especially noteworthy is he came into it with his place in the side under threat following the summer arrivals of Naby Keïta and Fabinho. His game-time and influence on Liverpool was meant to reduce but instead it has grown to the point where he is the most reliable, consistent and versatile midfielder for the team leading the way.

And now for City.

Wijnaldum will almost certainly find himself operating in a three-man midfield and tasked with putting pressure on those in blue when they have the ball – specifically the two Silvas, David and Bernardo –- and then, when possession is overturned, getting Liverpool’s front three on the front foot as quickly as possible.

Disrupt, distribute, run and rotate; instructions Wijnaldum has been following to a tee for some months now. About time more people noticed.