Klopp and Liverpool braced for their most difficult assignment to date 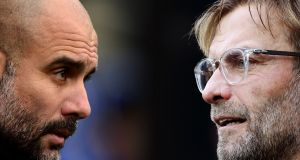 Pep Guardiola has admitted he does not know if Manchester City can handle the pressure of hunting down Liverpool as Jürgen Klopp’s side prepare to face another “thunderstorm” at the Etihad Stadium tonight.

If City can overcome the leaders they will close the gap to four points but they have failed to beat Liverpool in their last four meetings and face opponents who have dropped only six points this season.

But while Klopp has warned his players to expect “an intense game” against a side he considers to be the best in Europe – despite three defeats in their last five league matches – Guardiola was asked if his players can live with the demand of trying to chase them.

“What do I think? Yes, we are ready. I don’t have doubts but honestly I don’t know. It’s the same as when we had 10 or 11 points [ahead last season], if you asked me if we would maintain that distance for a long time, I don’t know. I have a game in my mind, I have what we want to do. I will speak with the players. That is what I feel but I am not good enough to anticipate what is going to happen.”

He added: “It is different pressure and we have to live it. We have to handle it. Maybe people expected we would always be top but we are Manchester City, we are not Liverpool or Manchester United. We are Man City – it is quite usual in the history [to be behind]. That is why it is nice after what we have achieved in the last decade to still be up there.”

Liverpool were thrashed 5-0 in the corresponding match last season but followed up a 4-3 win at Anfield, with victory in both legs of the Champions League quarter-final, winning 2-1 at the Etihad after Leroy Sané’s goal was disallowed for offside with City leading 1-0. Liverpool won 5-1 on aggregate.

Klopp believes his players should be ready to face another battle as they attempt to extend a winning record against Guardiola that has seen the German emerge victorious in seven of their 17 meetings.

“I think we should. It will be a very intense game. That is how it is,” he said.

“It was a thunderstorm. They said before the [second-leg] game they could do it from 3-0 down, and everyone knew they could. We knew it as well. We were a bit lucky, we know that, because they scored a second goal that the referee disallowed.

“Then we started controlling things a bit more towards the end of the first half. That can be the situation again, can be, but on the other side we are a different team as well. I don’t want it to sound like a threat because it’s not, it is just the situation.

“We have improved since last year, as we had to, but still this is the most difficult game to play because of their quality, the variations they are able to do and the different formations they can play. That makes it really special in the preparation.”

Victory for Liverpool would open up their lead over City to 10 points and Guardiola insisted tonight’s meeting is “almost a final” for his side.

He said: “We know how important it is. If we are not able to win, especially if we lose 10 points, goal difference 11 if they continue that run it will be so difficult. It’s almost a final for us. For them nothing changes [if they lose] . We have to face it like a football game and what we have to do to beat them. We know our strong points, what we are, and what we have to do.”