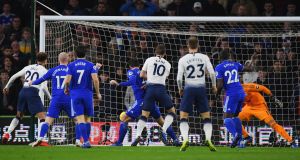 Tottenham turned up the heat on their title rivals by snatching back second place in the Premier League after comfortably dispatching Cardiff City.

Mauricio Pochettino challenged Spurs to play the role of protagonists here and, while they remain six points off the summit, they issued a timely reminder to Manchester City and Liverpool, who meet on Thursday, that they are determined to make life interesting, after bouncing back from a shock loss at Wembley in style. After the inquest into that defeat, Pochettino said his players are not robots, but they displayed a professional steel to tee up the coming weeks nicely with this slick and professional performance.

After slipping up against Wolves on Saturday, a trip to south Wales to face a team normally so bullish on home soil appeared a potentially awkward prospect. But Spurs, impeccably led by Harry Kane, clearly had other ideas, blowing away a desperately porous defence with three goals in 26 first-half minutes.

Cardiff gave Spurs free passage into their 18-yard box, as Kane got the ball rolling with little more than two minutes played, before Christian Eriksen and Son Heung-min wrapped up the most routine of victories. For Cardiff, this was yet another damning defeat against one of the league’s big-hitters, with Spurs sapping the life out of Neil Warnock’s side after their last-gasp victory at Leicester.

Cardiff’s record against the Premier League’s “big six” was naturally a concern, having lost their previous 14 encounters against such opposition, the latest of which was a 5-1 “battering”, as Warnock put it, against Manchester United last month.

He would have been right to fear this would go the same way when Kane struck after just 141 seconds, with the ball bobbling in off his right shin after Sean Morrison’s failed clearance under pressure from Dele Alli, before Eriksen doubled Spurs’ lead on 12 minutes.

It was all too easy for Spurs. A glance at the pained grimace on Warnock’s face said as much. Moments before, Cardiff enjoyed arguably their best spell, with Danny Rose leaping highest at the back post to head away Josh Murphy’s cross with Callum Paterson, the Cardiff forward, for company, a minute after Toby Alderweireld was fastest to Murphy’s pass.

Pochettino rued how his side badly faded at Wembley and suggested he would make several changes here in order to restore his side’s usual fervour given how the hectic fixture schedule had begun to impinge on performances.

In the end, as tempting as it must have been to rest Son, who will depart for the Asian Cup in the United Arab Emirates after their next league match, only Ben Davies made way for Spurs’ fifth match in 13 days, with Rose excelling on his return to left-back, while Warnock also tweaked personnel with Bobby Reid replacing Junior Hoilett, the winger entered at the interval in place of the lively Murphy.

Hoilett did at least give Davinson Sánchez something to think about and tested Hugo Lloris with a tame header.

Kane, who started and finished the opener and had a hand in the second and third too, freed Moussa Sissoko down the right flank with a spearing, sweeping through ball. Sissoko centred the ball for Son, who fed Eriksen to do the rest.

Harry Arter went to ground, the Dane composed himself, teasing Bruno Ecuele Manga by dragging the ball back-and-forth and bewildering Neil Etheridge, the Cardiff goalkeeper, as he shaped to bend an effort into the far corner before coolly rolling a cunning low strike inside the opposite post.

Any of the feelgood factor that Cardiff took from a last-gasp victory at Leicester three days ago had certainly wilted by the time Son added a simple third. Kane was again involved, effortlessly pushing a first-time pass into the path of his teammate after more good running by Sissoko down the Spurs right. Son dispatched another arrowed effort over the bar moments later and the game was done and dusted with an hour to play.

Kane could have scored a second himself, but for a superb block by Morrison, the Cardiff captain, midway through the second half. When Spurs did opt to grind through the gears, with the game already out of sight, Kane was at the heart of everything. Sol Bamba ran into trouble on halfway, with Sissoko cutting out his hopeful pass and picking out Kane. Cardiff were exposed, with Etheridge faced with four Spurs forwards. But back came Bamba to deflect Son’s low effort on to the Cardiff goalkeeper’s shoulder, and away. Then Aron Gunnarsson acrobatically denied a probing Alli in the box.

Cardiff had failed this test miserably but, with 15 minutes left to play, it was time for Spurs to experiment. Fernando Llorente made a late cameo, in place of Alli, while the 18-year-old Oliver Skipp replaced Son, with the Tottenham academy graduate midfielder gaining some more minutes before inevitably being involved against Tranmere in the FA Cup on Friday. The League Two side could do with making make that match somewhat less of a stroll for Spurs.