Moyes furious with Masuaka as West Ham crash out

Midfielder was sent off for spitting at Wigan’s Nick Powell 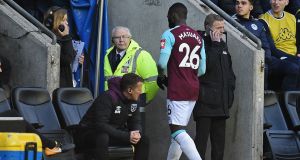 West Ham United’s Arthur Masuaku walks down the tunnel after being shown is shown a red card. Photograph: Getty Images

West Ham manager David Moyes has called Arthur Masuaka’s sending off for spitting “despicable”. The midfielder saw red as the Hammers were dumped out of the FA Cup 2-0 at Wigan.

Speaking after the game, Moyes said: “It was despicable. He will deserve everything he gets and he will get something he deserves from us. It’s unacceptable.”

Moyes added: “I’ve not seen it from him. We’ve given him a game, played him all the time, tried to give him a chance, he wasn’t really in the team.

“We like him, he’s a really good boy around the club. I’ve enjoyed him so I’d have to say it is out of character. If you do that, then you’re going to get the punishment in any walk of life.

Leeds midfielder Samu Saiz was given a six-match ban for spitting in his side’s fourth-round loss to Newport.

Victorious boss Paul Cook, a boyhood Liverpool fan, said of the fifth-round draw: “We need one hot ball and one cold. Liverpool at Anfield and we can settle for that.”

Wigan’s hero was Northern Ireland international Will Grigg, who again found himself the subject of the Wigan fans’ favourite chorus of “Will Grigg’s On Fire” as he headed home after seven minutes and converted a second-half penalty.

Having made six changes to his side for the visit to the League One leaders, Moyes must have recognised the worst once he saw Grigg send a powerful header past England goalkeeper Joe Hart as Wigan dominated the early stages.

Wigan’s fortunes have dipped since lifting the Cup in 2013, the year they also earned the unwanted distinction of being the only side ever to win the trophy while also being relegated from the top flight.

Yet their fans at the DW Stadium, who have recently been used to their side upsetting Premier League sides in the FA Cup, were left in ecstasy when Grigg scored his second in the 62nd minute from the spot after a hand-ball from Reece Burke.

Barcelona and Bayern battle for right to take on nouveau riche 20:44
Caldwell makes himself at home at Celtic Manor 20:32
Anderson swings back into form against Pakistan 19:52
Selby strikes back against O’Sullivan 18:44
Up to 25 Stade Francais players and staff reported to have tested positive 18:20

1 Worst sporting moment: White knuckle ride on a hate-filled night at Windsor
2 Bundini Brown: The man who invented ‘float like a butterfly, sting like a bee’
3 Sonia O’Sullivan: Russian Affair lays bare one of sport’s greatest scandals
4 Up to 25 Stade Francais players and staff reported to have tested positive
5 Selby strikes back against O’Sullivan
Real news has value SUBSCRIBE