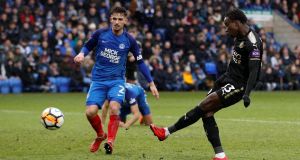 Leicester eased through to the fifth round of the FA Cup with a comfortable 5-1 victory over Peterborough at London Road.

Claude Puel made 10 changes from the side that beat Watford in the Premier League last week with Jamie Vardy and Riyad Mahrez both named on the bench.

But the Foxes, now unbeaten in their last six matches, were a class above the League One side with Kelechi Iheanacho and debutant Fousseni Diabate both scoring twice before Wilfred Ndidi completed the rout in stoppage time.

Peterborough, eighth in League One, may have sensed a cup upset following Puel’s decision to rest a number of key players ahead of his side’s league fixture at Everton on Wednesday night.

But any hope of Grant McCann celebrating his 100th game in charge by securing Posh’s first FA Cup victory against top-flight opposition in more than half-a-century, was virtually over inside 12 minutes.

Despite driving rain, the Foxes were on their game from the very first kick and were a goal to the good with just nine minutes gone.

The home side were guilty of their own downfall, giving the ball away following a sloppy throw-in, and the second-string Premier League outfit were not in a forgiving mood.

Iheanacho slid the ball through to Diabate, and the 22-year-old forward who arrived at Leicester from Ligue 2 club Gazelec Ajaccio earlier this month, drove into the box before prodding home with his left foot.

It was a fine finish in his first appearance and no more than Puel’s side deserved following a scintillating start. It was to get even worse for the hosts just three minutes later.

Again, Peterborough were the masters of their own demise as Chris Forrester gifted the ball to Iheanacho deep inside the home side’s half.

The former Manchester City forward had options to his left, but he chose to go alone, curling his left-footed strike into the bottom corner.

Leicester were in charge of the tie, and they put the game firmly out of reach shortly before the half-hour mark when Iheanacho netted his second of an impressive afternoon.

Christian Fuchs, the stand-in Leicester captain, whipped in an exquisite ball from the left-hand side, and Iheanacho , who scored twice in their cup replay victory against Fleetwood earlier this month, was there to volley home from six yards out.

The Nigerian has become something of an FA Cup specialist in recent seasons with his first-half double here taking him to nine in the last two years. No other player has more in the competition.

Danny Lloyd had Peterborough’s best chance of the opening period, but his stooped header fell wide of Ben Hamer’s post, and to add insult to injury, Lloyd collided with the post. It marked an opening half to forget for McCann’s men, and a chorus of boos greeted referee Michael Oliver’s whistle at the interval.

To their credit, Peterborough rallied in the second half, and they pulled a goal back after 57 minutes when Andrew Hughes scored from a corner.

Remarkably, it was the first goal Leicester have conceded this year, but the only blemish in a professional and clinical display with Diabate completing a fine debut when he added a fourth after 87 minutes before substitute Ndidi fired home with the final kick of the match.

Gordon D’Arcy on a Halloween thriller; Will an empty Hill derail the Dubs? 07:51
Gordon D'Arcy: Ireland must conquer fear on a scary Halloween in Paris 07:55
Seán Moran: Will a silent, empty Hill help to loosen Dublin’s grip on Sam? 07:55
Dave Heffernan delighted to have banished bad memory of his first cap 06:00
Cillian O’Connor rejuvenated and eager to resume Mayo’s quest for glory 06:46

1 Gordon D'Arcy: Ireland must conquer fear on a scary Halloween in Paris
2 Cian Healy: ‘Realistically I got away with murder when I was younger’
3 Cork City expected to approve €1 takeover by Preston owner
4 Dave Heffernan delighted to have banished bad memory of his first cap
5 Seán O’Brien: Anger over my parents’ break-up never left me
Real news has value SUBSCRIBE