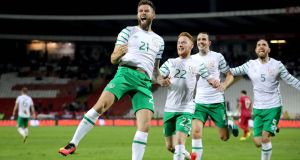 Republic of Ireland manager Martin O’Neill has paid tribute to striker Daryl Murphy after the 34-year-old announced his retirement from international football.

He said: “I would just want to let all the Irish supporters know that I’ve come to the decision to retire from the national team.

“It’s been a hard decision to make, but I would just like to thank all the fans for all their support and I hope the best for the future.”

O’Neill, who brought the Waterford-born player back into the Ireland team after a number of years away from the international game, believes that the hard-working striker gave everything during his time with Ireland.

“Daryl did really well in the couple of years that I worked with him in the international set-up and he was always very professional,” said O’Neill.

“He got to play in two very big matches at Euro 2016 and I’m sure the Italian game in Lille will be a big memory for him when he looks back on his days with Ireland.

“I wish him all of the best not just at club level but whatever he chooses to do after that.”

Murphy played at underage level for Ireland before earning his first senior cap against Ecuador on a summer trip to the United States in 2007 and his final appearance was in the 2018 World Cup qualifying playoff defeat to Denmark in November 2017. In total he won 33 senior caps, scoring three goals, included vital strikes Serbia and Moldova during the 2018 World Cup qualifying campaign.