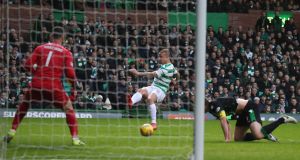 Leigh Griffiths scored against former club and boyhood heroes Hibernian for the first time to give Celtic a narrow 1-0 Scottish Premiership win at Parkhead.

In what was Brendan Rodgers’s 100th game as Hoops boss the returning striker struck in the 27th minute before an injury minutes later meant he was replaced by Moussa Dembele.

Griffiths’s 14th goal of the season was enough to take all three points from a more than decent Hibs side who had drawn 2-2 with Celtic in their previous two league games this season.

The Scotland striker had recovered from an ankle knock to come off the bench to score the winner at Partick Thistle on Tuesday night and there was no surprise that he replaced Odsonne Edouard, while stopper Jozo Simunovic came in for Mikael Lustig with centre back Dedryck Boyata moving to right back.

Striker Oli Shaw replaced Simon Murray for the visitors who looked far from overawed in the early stages.

However, Celtic should have taken the lead in the 14th minute after midfielder Callum McGregor was fouled by former Celt Dylan McGeouch, who had an excellent afternoon, just outside the box.

Griffiths’s curling free-kick was parried by Ofir Marciano and with the goal gaping, Sinclair somehow managed to hit the post with the ball ending up in the arms of the Hibees number one, to some disbelief in the stands.

The match opened up further and Griffiths volleyed wide from a Sinclair cut-back.

At the other end, Celtic goalkeeper Craig Gordon used his foot to block a Brandon Barker drive after the Easter Road attacker had outstripped the Hoops defence.

Hibs had themselves to blame for Griffiths’s goal.

Skipper Paul Hanlon failed to deal properly with a Kieran Tierney cross from the left, his weak headed clearance immediately returned on the angle past Marciano by the Scotland striker with centre back Darren McGregor unable to stop it crossing the line.

There was a muted celebration from Hibs-supporting Griffiths in front of the travelling fans but his inner joy turned to despair minutes later when he limped off.

Dembele came on for his first piece of action this year with Rodgers having recently expressed concern that transfer speculation had affected him and ended the afternoon with a booking for simulation.

Gordon, who had been clattered by former Parkhead defender Efe Ambrose before the break, was replaced by 37-year-old Dorus de Vries for the start of the second half where the home side looked more purposeful.

In the 51st minute Sinclair had another good chance but Marciano saved the drive from 10 yards with his leg.

Hibs midfielder John McGinn forced a decent save from De Vries with a powerful 25-yard drive in the 78th minute and the match swung to and fro in the final, nervy minutes.

However, Celtic stood firm although, with a Europa League tie against Zenit St Petersburg coming up, they will wait nervously on news of the collateral damage from Griffiths’s injury.