Rashford, Herrera, Lingard and Lukaku found the net to send the visitors into last 16 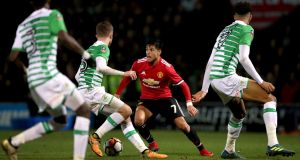 Manchester United were discomforted for periods in this corner of Somerset, their style occasionally cramped by Yeovil Town’s urgency and the visitors’ agitation was raised at times to the beat of the drummer in the raucous Thatcher’s Gold stand. But in the end, once underlying qualities had told, this was made to feel more like a saunter into the fifth round.

Alexis Sánchez could depart warmed by two simple assists on a first appearance as this club’s No 7. It is hard to make too many sweeping judgments of how easily the highest paid player in English football will slip into United’s forward ranks after a dismissal of spirited opponents from the bottom tier, but this was still an encouraging start. Certainly, his presence seemed to coax eye-catching form from Marcus Rashford at his side. José Mourinho, his hands buried deep into pockets as he surveyed the scene, had reason to be cheered by this display on his 55th birthday.

For all the sense of anticipation whipped up by Sánchez’s inclusion from the start, it had been the hosts who had torn more eagerly into the tie, scuttling forward at pace almost from their pre-match huddle to unnerve Marcos Rojo and Victor Lindelöf at the heart of United’s defence. Jordan Green sprang down the left, twisting and turning to liberate himself from his marker, while Sam Surridge and François Zoko, booked inside the first minute for a challenge on Rojo, snapped at the visitors’ back line.

That early urgency, tantalisingly, had threatened to yield a lead. Had Omar Sowunmi met Jake Gray’s early free-kick with more conviction then the locals, willing the ball in, might have raised the roof. Instead Sergio Romero claimed the header with comfort.

The goalkeeper had already improvised to block Green’s low drive with his feet, and would push out Thomas James’s swerving free-kick before the break. Indeed, while Yeovil whipped up that whirlwind the gulf between the sides – second in the Premier League to opponents two points off the cut-off at the foot of League Two – had not appeared to gape quite so wide. Yet that lack of cutting edge and composure in front of goal from Darren Way’s team would tell before the interval.

United may have been disjointed for long periods, unable to impose themselves on a frantic contest for all Juan Mata’s clever delivery and Sánchez’s energy, but they were far more ruthless. By the break, their lead had been established.

It was secured by the visitors’ most impressive attacking forward. It had been Rashford, not Sánchez who had most unnerved the home side, his quick feet all a blur and his movement incisive in the middle of United’s front three. His pace in possession was blistering at times, his eagerness to shift the ball to team-mates disorientating lower league opponents. A spasm of indecision from James and Nathan Smith, each waiting for the other to shepherd the ball back to Artur Krysiak, eventually presented Rashford with his chance and he duly pounced. His finish was clipped beyond the goalkeeper for a 10th goal of the campaign. The concession rather deflated the locals, an anticlimax after a half of excellent endeavour.

Sánchez had played his part in establishing the lead, driving into the box before slipping his pass to the England striker, and would repeat that trick on the hour-mark as the visitors extended their advantage. In truth, the Chilean, with only two training sessions as a United player under his belt, had been as wasteful in possession as he was productive up to then, but was ever eager to coax, create or accelerate forward. He already has the strut of a United player, the air of someone who knows he belongs, and has swiftly assumed set piece duties. It was his corner that was met by Mata on the turn early in the second half, the Spaniard’s shot clipping the top of the bar, and his gallop downfield and pass for Ander Herrera that eventually supplied the second.

By then the momentum appeared to have shifted, fatigue steadily creeping into Yeovil legs as the adrenalin subsided and passes became increasingly optimistic and rather wild. Michael Carrick, all calm authority, had imposed some control. Krysiak, an unused substitute when United had won 2-0 in this arena a little over three years ago, and his centre-halves did their best to stem the tide, but quality told.

The goalkeeper had denied Scott McTominay impressively, but he was helpless as United countered in numbers from Yeovil’s first corner of the second period. Sánchez was at the core of that burst with Herrera, a scorer here in 2015, sprinting alongside before thumping his shot into the corner.

They would stroll through the latter stages, Angel Gomes almost scoring with his first involvement off the bench before another substitute, Jesse Lingard, rolled the visitors’ third across Krysiak and in. The England international’s participation could be threatened most by Sanchez’s arrival. This was a timely reminder of his own qualities before Romelu Lukaku added another from close range in injury time. – Guardian service