He’s hoping to bring in Roy Keane, another former Forest favourite, as his assistant 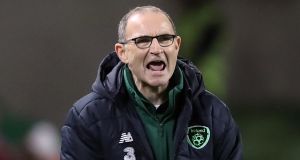 Martin O’Neill is poised to become the new manager of Nottingham Forest in a move that would return him to the club where he won two European Cups during the Brian Clough years.

Evangelos Marinakis, the Forest owner, has held talks with O’Neill in Birmingham and London over the last 48 hours and the club are optimistic about finalising a deal for the man they have identified as the outstanding candidate to take over a team four points outside the Championship play-offs.

If everything goes to plan, an announcement is expected to end a 25-year pursuit for Forest that first saw them try to appoint O’Neill as Clough’s successor in 1993. Various regimes at the City Ground have subsequently tried to entice O’Neill back to the club and he was prominently in Forest’s thoughts before the appointment of Aitor Karanka last January. Until now, however, Forest have never been able to get their man. O’Neill is hoping to bring in Roy Keane, another former Forest favourite, as his assistant.

Marinakis has significant transfer funds available for the new manager and the Greek shipping magnate is understood to have been hugely impressed when he met O’Neill to discuss the possibility of filling the void left by Karanka’s departure last week. Sources say Marinakis, with firm plans to re-establish the club at the top level, was “blown away” by O’Neill’s energy and drive to succeed in the city where he first came as a young apprentice in 1971.

The hierarchy at Forest have noted the way O’Neill won promotion at Leicester City and transformed a second-tier side into one that secured four top-10 finishes in the Premier League, reaching three League Cup finals, winning two and lifting the club’s first silverware since 1964.

O’Neill went on to win seven trophies for Celtic, as well as reaching the Uefa Cup final, before returning to English football to take control at Aston Villa, who finished 11th, up from 16th, in his first campaign and then sixth in each of his last three seasons at the club, qualifying for Europe and, in 2010, the League Cup final.

The only downside in his club career in management goes back to his time in charge at Sunderland, the team he supported as a boy, when he was sacked in 2013 after a poor run of results. O’Neill subsequently took the Republic of Ireland job and led a willing but limited group of players to the knockout stages of Euro 2016, where they were eliminated by France. He also took Ireland to the qualifying play-offs for the last World Cup, at the expense of the Wales side that reached the Euro 2016 semi-finals, but they lost to Denmark and he left his position last November after an unsuccessful campaign in the European Nations League.

O’Neill has since faced heavy criticism from the Irish media about his style of play, whereas Forest have taken the alternative view that he inherited the least talented group of players the country has produced for many years and actually overachieved to take them to a major tournament, beating Italy and Germany, the world champions, in the process.

Marinakis was left with the clear impression that O’Neill had the force of personality to give Forest a new impetus and, though the Irishman is 66, that is still younger than Claudio Ranieri, Neil Warnock and Roy Hodgson, three managers working in the Premier League. O’Neill’s enthusiasm was a key factor in winning over Marinakis and the club believe there is time, with 19 games remaining, for Forest to overcome a slump that has seen them win only one of their past seven league matches, leaving them ninth in the Championship.

As for O’Neill’s style of play, the feeling within Forest is that for the vast majority of his career there were seldom any complaints. At Villa, for example, his team scored more times, 71, in the 2007-08 season than any other year since winning the league in 1981. O’Neill was arguably the most popular manager in Leicester’s history until Ranieri’s team won the title in 2016 and is still revered at Celtic.

Speaking last month, he said: “I know I’m a good manager and I will always back myself, in whatever job I take next. There’s a perception now that I’m not only too old, but that I’m on the outside looking in. There’s an age element to it, but people also believe you’ve closed your mind to things. It couldn’t be farther from the truth. I’ve still got things to do in this game. I feel young, hungry.”

O’Neill, an integral part of the Forest side that won the European Cup in 1979 and 1980, is seen as having the motivational qualities to refocus the players and staff at a time when Karanka’s drawn-out departure has led to a period of uncertainty behind the scenes. Karanka’s fall-out with senior figures at the club led to him asking to be released from his contract on two separate occasions last week. For the previous few weeks, players have reported he had become detached and was taking a less hands-on role. Training is said to have deteriorated, leading to a listless 2-0 defeat at second-from-bottom Reading on Saturday, when Forest finished with nine men because of red cards for Danny Fox and Tendayi Darikwa.

O’Neill, who attended that game, is likely to bring in Steve Guppy as part of his backroom staff as he contemplates taking charge for the first time in Forest’s home game against Bristol City on Saturday.

1 Gordon D’Arcy: There’s more to Saracens’ success than money
2 Seán Moran: Total disregard for schools as GAA votes one way and acts in another
3 10-man Arsenal show their heart to rescue a point at Chelsea
4 As the UK tightens gambling laws Ireland still lags way behind
5 Naomi Osaka and Coco Gauff set up repeat showdown in Melbourne
Real news has value SUBSCRIBE