Results rather than performances now the focus for everyone at Anfield 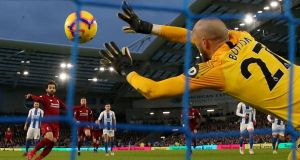 Andy Robertson believes the title battle between Liverpool and Manchester City will be fought to the bitter end and that, with the margin for error so slim at this stage, performance levels are ultimately less important than finding a way to win.

Liverpool opened up a seven-point gap at the top, at least until City have played Wolves this evening, with a largely forgettable win at Brighton but there are few illusions inside the -dressing room that, their heads cleared from losing narrowly to their rivals for top spot 10 days ago, the next four months will turn into a procession.

The victory over Chris Hughton’s side, earned through Mohamed Salah’s 49th-minute penalty, will occupy minimal space in the end-of-season highlights compilations but Robertson pointed out that it does not stand alone.

“The two Brighton games have been massive for us,” he said, recalling how Liverpool struggled to a similarly hard-fought 1-0 win at Anfield in August. Their knack for coming out on top during days of relative drudgery is perhaps the most eye-catching difference in this season’s team and it provides as much satisfaction as those games when they manage to cut loose.

“But that’s what all the teams are doing now. City haven’t played their best but have been winning games and Tottenham have done the same, so I think we are all showing signs of doing that.

“Whoever wins the league will look back on some games and go ‘Do you know what, we probably weren’t at our best there, and that was probably one that helped us turn one point into three or zero into one’.”

Moments like the second-half block Fabinho produced from -Pascal Gross certainly contribute to that feeling. The Brazilian was asked to deputise at centre-back and, after one early blip when he let Glenn Murray escape, mastered the occasion well.

“I thought he was different class,” Robertson said. Fabinho has overcome a quiet start at Liverpool to be increasingly influential, albeit mainly from his favoured midfield role, in recent weeks and Robertson drew parallels with his own adaptation after joining from Hull City in July 2017.

“It’s just learning, and of course the massive expectations that come with playing for Liverpool sometimes take a wee bit of getting used to. It did for me, and once I got used to it I’ve not really looked back. Fabinho took his time and now we are getting the rewards from it.”

Liverpool will travel to Dubai for a warm weather training camp after Saturday’s match with Crystal Palace, having been freed up to do so by a skeleton side’s 2-1 defeat to Wolves in the FA Cup third round.

By then, Fabinho should be primed for a return to the engine room. Jürgen Klopp hopes Joël Matip, who was on the bench at Brighton but not ready to start after recovering from a fractured collarbone, will benefit from the gap in their fixture list along with Dejan Lovren and Joe Gomez, who may both be available by the end of the month.

Although he would never say so, Robertson might appreciate a slowing down in the schedule.

On Thursday his wife, Rachel, gave birth to their second child and he had to leave them the following day to travel with the team. His performance did not miss a beat, one fizzing first-half cross almost resulting in a goal for Roberto Firmino. On the pitch, the next four months will be about negotiating every bump in the road and letting as little speculation as possible reach their ears.

“Look, we hope we are here to stay,” Robertson said. “We let everyone else talk because the only pressure for us is playing for Liverpool. And we can deal with that.”