Arnautovic can deliver, but West Ham will have to pay the price

Michael Walker: blend of consistency ability and experience make him a wanted man 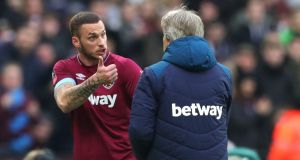 If you can remember November, three days after Northern Ireland demonstrated at Lansdowne Road that they are more than the sum of their parts, Austria arrived at Windsor Park for a Nations League game.

Once again Michael O’Neill’s players – featuring two from the Premier League – played above themselves. They were drawing 1-1 with the Austrians when, with 20 minutes left, Marko Arnautovic arose from the dugout, puffed out his chest and strutted to the touchline.

It was a good match at that point, growing in rhythm and tenacity. But Arnautovic took it to another level.

He quickly teed up David Alaba with a great chance, had a fight with Gareth McAuley, then supplied the pass from which Austria scored their injury-time winner. Then, obviously clear in his own mind that his 20 minutes had altered the course of the night, Arnautovic strode off, shirt removed.

He is a player who can do that, change the shape of a game.

There are youth coaches in Vienna who were saying the same nearly 20 years ago. But it is now, at 29, that Arnautovic can be depended upon to deliver, then deliver again. Consistency has chimed with ability and experience. Together it makes Arnautovic a dangerous and wanted man.

At 29 he may have attained maturity; not of the benign Trevor Brooking claret, but in terms of understanding the possibilities within. At 29 Arnautovic looks as if he knows himself and the game.

Even in an age-concerned industry such as professional football, at 29 he looks young. He has physique, technique and an aura. He has added strength to his skill and determination to his strength. He understands his role in a system. It is a powerful combination.

In short, Arnautovic is worth the fuss and the fortune. At 29 he is getting better. The problem for West Ham is that he knows it. O’Neill’s top-four remark will have rung in the ears of the Austrian, and his agent, who is his brother Daniel.

Which brings us to where we are. Fast forward to last Saturday, and another 20-minute Arnautovic appearance. This one came at the beginning of a match, not its dramatic end, and the player was not its author.

After 20 minutes of West Ham’s FA Cup tie at the London Stadium against Birmingham City, Arnautovic saw his number come up. He was to be substituted, replaced, and he was not happy. Manager Manuel Pellegrini would say the forward had a back injury, but the pain Arnautovic was exhibiting was of embarrassment. He made his feelings known as he brushed past Pellegrini. It was uncomfortable.

It is easy to blame the player here, especially one not unfamiliar with petulance. This is someone José Mourinho described as “a fantastic person with the attitude of a child” when Arnautovic was on loan at Inter Milan.

He shared a flat with Mario Balotelli then. It must have had high ceilings.

But Arnautovic was only 20, and it was a long time ago. By last Saturday he was entitled to his annoyance. Why was he selected to start? If West Ham wanted to protect him for the next match – at home to Arsenal – why not have him on the bench against Championship opposition?

We do not know if a chord snapped, but his brother has been strumming away in the background and then on Wednesday: boom.

An offer from China arrived in the West Ham in-tray. It was £35 million for West Ham and a stratospheric salary for Arnautovic. It set off an alarm within the club because West Ham knew it was the first offer for Arnautovic this month, not the last.

On Thursday another boom: Arnautovic expressed “a great desire” to leave for China. No club was specified in his statement. That seems odd.

But O’Neill’s “top-four” comment stands. Arnautovic could play for any of them, in fact any of the top six.

Chelsea know this. They know Alvaro Morata has five Premier League goals this season in a team which has scored 38. Arnautovic has seven of 29 West Ham goals in a team that has won eight matches.

And when he was making his way at FC Twente in the Netherlands, Arnautovic was due to join Chelsea in the summer of 2009 from the Dutch club. A broken bone in a foot postponed that and when he had recovered the transfer had been cancelled. It is an indication of the esteem in which Arnautovic was held.

And yet after the Inter Milan loan fizzled out, he joined Werder Bremen in the Bundesliga. After three seasons there moved to Stoke City and for the meagre sum of £2 million.

It shows Arnautovic has known sideways moves and downwards appreciation as well as praise, and while his wages will have been incredible to most people, in football he will have been a mid-table earner.

His development under Mark Hughes at Stoke was such that he was sold for £25 million. It made him West Ham’s record transfer. Stoke, meanwhile, were relegated in his absence.

Yet it has been reported this week by those close to West Ham that Arnautovic earns less than Andy Carroll. If so, you can see why he and his brother would be peeved.

Lest we forget, last season – Arnautovic’s first at the club – was arduous. By December he had not scored, and West Ham were second bottom with 10 points.

Then they beat Chelsea at home. 1-0, Arnautovic.

It was first of nine goals in 15 matches, and by season’s end, under David Moyes, West Ham were 13th. Arnautovic was named the club’s player of the year. Declan Rice came second.

This season began with four league defeats, but West Ham are now stable. They should be approaching Arsenal with confidence that their main striker can tear at a vulnerable visiting defence.

Yet the ghost of Dmitri Payet had suddenly entered the play. Two Januarys ago Payet had his head turned and left acrimoniously for Marseilles. West Ham could not keep him and the Hammers’ fear is that history will repeat itself with Arnautovic.

The club is cornered. There is a way out, however, and that is to invest in their player, pay him spectacularly. Give him £10 million for three years; £30 million is what they would probably need to spend on a replacement, plus wages.

If West Ham consider Arnautovic essential to their future, and they say they do, then he is worth it.