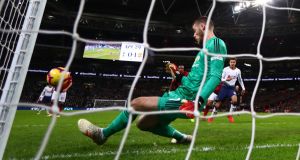 Contrary to some of the pre-match hype, this result will not decide anything for certain with regard to who succeeds José Mourinho on a permanent basis at Manchester United in the summer. Mauricio Pochettino and Tottenham lost so it is curtains for the Argentinian and his hopes? Not at all. He will remain of great interest to the power-brokers at Old Trafford.

But what it did do was to swell the feelgood factor that has built under the caretaker management of Ole Gunnar Solskjær at United. Remarkably, he has now won each of his first six games in charge – no United manager has ever done that – and this was a big win.

Tottenham have established themselves as a Premier League force under Pochettino and they threw everything at United in the second half. Unfortunately for them, they ran into a goalkeeper in inspired form. David de Gea made a succession of saves and blocks with his feet in a man-of-the-match performance. Spurs could count themselves unfortunate to lose.

What was most pleasing from a United point of view was that Solskjær’s team came to play. They were the better team in the first half and they continued to offer a threat in the second period, even if De Gea’s heroics came to be the story. Solskjær wants the job on a permanent basis. Much more of this and his claim will become more urgent.

United’s visits to top-six opposition under Mourinho had been grisly wars of attrition, with only a couple of exceptions. They did not so much as park the bus as throw the keys into the stand and the statistics showed just two wins from 13 matches – and 11 goals scored.

Solskjær wanted to attack and he sprang a tactical surprise by starting Jesse Lingard, rather than Romelu Lukaku, as the central striker, with Marcus Rashford and Anthony Martial either side of him. The idea was for Lingard to stop Spurs from playing out from the back through their centre halves and the deep-sitting midfielder Harry Winks by leading the high press – and the trio gave United a pacy and energetic feel.

Solskjær’s team looked as though they might score from the outset and it was certainly an encouraging sight from their point of view to see Lingard buzzing and both Rashford and Martial, at various times, lengthening their stride on the counter-attack.

They deserved their half-time lead and it came on 45 minutes when Lingard intercepted a loose pass from Kieran Trippier and found Pogba who, in keeping with Solskjaer’s philosophy, got United moving forward quickly. It was a sumptuous crossfield ball from the Frenchman that released Rashford up the inside right channel and the latest evidence of the freedom with which he is playing under Solskjær.

Rashford had got himself up against Jan Vertonghen, who was back after two months out with a hamstring injury, and the Spurs defender never looked like stopping the United forward, whose first touch was assured and set up the shooting chance. The angle was tight-ish but the low finish was arrowed into the far corner, via Hugo Lloris’s fingertips.

Spurs had started as the favourites, which reflected the manner in which they have changed perceptions under Pochettino but it was always going to be interesting to gauge their intensity levels after last Tuesday’s Carabao Cup semi-final, first-leg against Chelsea, when they looked jaded. United, by contrast, were fresh from a warm-weather training break in Dubai. Spurs would lose Moussa Sissoko to a muscular injury on 42 minutes.

Winks got himself into a good area in the early running only to cross to nobody; Harry Kane had a shot blocked by Nemanja Matic after a United breakdown on a corner and the Spurs striker also saw a goal correctly ruled out for offside. But it was the visitors who looked the slicker and more threatening before the interval.

They could look back upon a chance for Lingard, which he snatched at and lifted high and low shots on the break from Rashford and Martial, which Lloris kept out – the second one smartly with his feet.

Spurs dug deep to find greater urgency in the second half and they advertised the equaliser. Sissoko’s replacement Erik Lamela injected bite and penetration, Trippier repeatedly got into crossing positions on the right and Dele Alli and Kane shimmered with menace.

Spurs created a raft of chances and many of them were gilt-edged ones, beginning with Kane’s on 48 minutes, following Alli’s lovely through ball, only for Kane to shoot straight at De Gea. The United goalkeeper did well to keep out an Alli header while another from Kane was more comfortable. He was just getting started.

De Gea’s one-on-one block from Alli in the 66th minute took the breath and so did the save he made with his left foot to keep out Toby Alderweireld’s near post flick from a corner. There was a flying catch from a Kane free-kick and further excellent saves to deny Alli and Kane. De Gea refused to be beaten.

United had their chances at the other end in the second half. Pogba saw a header saved by Lloris and there was also the moments when he chased after his own blocked shot, brushed aside Christian Eriksen and lobbed Lloris. The Spurs goalkeeper made a wonderful reaction save.

This was good Pogba, the kind of fusion of muscle and deft touch that can illuminate games, but there was a flash of bad Pogba on 78 minutes when he left a nasty boot in on Alli, for which he was booked. He diced with further trouble by hurling the ball away immediately after the foul. Pogba had worked Lloris with a low shot a little earlier.

It was thrillingly open, the sort of game that United fans used to see on a regular occasion. Happily for them and Solskjær – and thanks in large part to De Gea – it had a happy ending. – Guardian service

1 Six Nations: Ireland are contenders but England still the team to beat
2 Mike Catt hopes to have Irish backs purring in Six Nations
3 GAA officials and referees brace themselves as new rules kick in, and this time it's for real
4 Limerick roar from behind to sink Tipp and start league in style
5 Liam Cahill uses playing regrets to drive him as Waterford boss
Real news has value SUBSCRIBE