McCarthy unclear when Rice will make decision on his international future

Ireland manager hopeful Rice can be persuaded to stick with Ireland 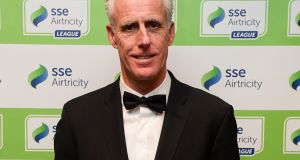 Republic of Ireland manager Mick McCarthy at the Airtricity/Soccer Writers’ Association of Ireland awards for 2018 in a Dublin hotel. Photograph: Stephen McCarthy/Sportsfile

Mick McCarthy says he is unsure what is uppermost in Declan Rice’s mind as the young West Ham star continues to weigh up his international future, and is unclear when he will make his decision.

However, the Ireland manager remains hopeful that the prospect of playing more games in the position he has thrived in at club level might persuade him to stick with Ireland.

The recently-returned Ireland manager spoke with the 19-year-old before Christmas, having previously talked to his England opposite number Gareth Southgate about the situation. However, he insists that the player’s interview with the London Evening Standard, published on Thursday, in which Rice says he will make his decision soon is as much as he knows about what is likely to be decided.

McCarthy believes there is both an emotional and a professional basis for Rice choosing Ireland over England, arguing that he has already grounded himself in the Ireland set up though his involvement with both the underage and senior sides. And while he would use the player in midfield, Southgate sees him as a defender.

“I cannot give him a counterbalance for all those things about England [the fact that the team qualifies for almost every major international tournament] but if it’s an emotional argument, that you want to play for Ireland, your family are from there, he’s played three games for us, then it’s a bit easier,” said McCarthy, who was in Dublin on Friday night for the Airtricity/Soccer Writers’ Association of Ireland awards.

“I spoke to Gareth and he saw him as a centre back,” he added. “I thought because he’s not playing there at the moment he wouldn’t be there in front of the ones already in there [for England], plus he’s not been in their youth system and come through like he has with ours…and Gareth Southgate was running theirs for a long time.

“I spoke to him [Rice, and made it clear] I want him playing in the position he is now at West Ham, for now at least, and see where he develops. I spoke to him and his Dad for a long time. I spoke to his Dad prior to that. I think he saw himself initially as a centre half but then he is enjoying midfield.

“I said to him ‘I’m looking to build a team around him from March onwards.’ Are England?’

“It’s not my decision to make, though, it’s his. So I just left it with him. I’d like a decision at some stage. December’s gone, we’re into January, it will come around pretty quick. But there’s no worries with him. It’s not like we have to change him over from one to the other.”

Rice would have to complete an international transfer with Fifa before he can play for England, something that might keep him out of their games in the event that he does opt to make the switch. Yet McCarthy admitted that would probably not be a major factor for a player who potentially has an awful lot of international football ahead of him. “He’s only 19, isn’t he?”