Hendrick, Long and Clark are among the Irish players to make their mark over weekend 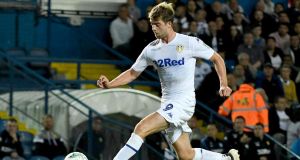 Patrick Bamford of Leeds United. “He’s a goal-scorer; he’s a proven goal-scorer, technically a very good finisher, and we haven’t got that many.” Photograph:Getty Images

As Declan Rice turns in another Man of the Match award-winning performance against Arsenal, scores his first senior goal for West Ham and has the Match of the Day crew joking about how many games he will play for England over the years ahead, Mick McCarthy continues to work to widen his options in other areas of the pitch.

McCarthy says he has spoken to Patrick Bamford of Leeds United, is planning to meet Southampton’s Nathan Redmond, and has raised the notion of a return to international action with Daryl Murphy of Nottingham Forest.

Bamford is the longer term prospect, and the manager seems positive about the 25 year-old, who played one friendly underage game for Ireland before declaring for England.

“I’ve spoken to Patrick,” he says. “I was due to go meet him at the Leeds game with QPR at the weekend, but he was injured so he didn’t travel, so I didn’t get a chance. But my intention is to meet him and have a chat. He wants to meet me.

McCarthy has confirmed that he sees Seamus Coleman retaining the captaincy of the Irish team for the coming campaign, that Alan Kelly is back on board as goalkeeping coach, and that the squad is all but certain to head to Portugal for a training camp at the end of the English league season.

The manager will have taken some encouragement from events over the weekend, with Jeff Hendrick, Shane Long and Ciaran Clark amongst those to make their mark.

Rice described his goal in Saturday’s London derby, a well place first-time strike from inside the area, as his “best birthday present ever”.

The rapidly-rising London-born star turns 20 on Monday, and his latest performance suggests that he would not be far off the England team on current form, a prospect that used to be seen as somewhat more remote when compared with the immediacy of the opportunities that would be open to him should he decide to declare for Ireland.

Hendrick, meanwhile, had a big hand in both of Burnley’s goals against Fulham. Both were initially put down as own goals, but the first was the product of a shot that looked to be on target before Joe Bryan intervened, while the second was a dangerous looking cross that Denis Odoi headed beyond his own goalkeeper.

“I don’t know,” said Hendrick, when asked about getting formally credited for the first one. “I haven’t seen it back. I tried to look at it on the screen when I was trotting back but once we got the goal today it was about the three points.”

Long seems to be widely credited with Southampton’s second against Leicester City despite the fact that it didn’t actually look to be on target until the goalkeeper’s attempt to save backfired. It is the Irishman’s first in 15 appearances this season after having scored two in 35 last year.

“I think my performances have been good of late,” said Long, who also won his side’s penalty for the other goal in a 2-1 win and has certainly shown significant improvement under new manager Ralph Hasenhüttl. “But I felt as a striker I hadn’t been getting chances to miss.”

Clark scored a fine headed goal for Newcastle who lost at Chelsea, while in the Championship David McGoldrick got his fifth in six games as Sheffield United beat QPR.