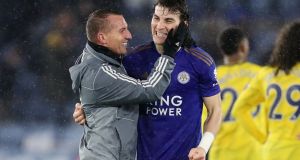 In a side room at the King Power Stadium, Brendan Rodgers was allowing himself to reflect.

Only eight and a half months had passed since he joined Leicester City but the 90 minutes everyone had just witnessed felt among the most significant of that time. Leicester had just outmanoeuvred Arsenal, their claim to a Champions League spot looking increasingly hard to resist, and the atmosphere around the stadium bore resemblance to the near-disbelieving euphoria that helped sweep them to the title in 2016.

“I felt the opportunity to hook into an emotion here for a number of reasons,” Rodgers said.

Four months before his arrival the architect of Leicester’s lifetime high, the club’s owner Vichai Srivaddhanaprabha, was killed in a helicopter crash outside the ground. At that time Leicester, under Claude Puel’s management, were still trying to navigate the shift in landscape that came with topping the league. They were struggling for a fresh identity and it was a devastating blow to lose the leader regarded by so many as “The Possible Man”.

“It must have been so difficult for Claude and everyone around the team because I felt the great values and the light [Srivaddhanaprabha] brought this club were blocked,” Rodgers said.

“I felt I could maybe come in and bring that light into the team again, and use that legacy he left in a really positive way.”

The line was a nice one, sensitively delivered, and brought to mind a briefing Rodgers had given journalists a few metres down the corridor during his first week in charge. Back then he said: “It just feels . . . as if I have been here longer. With everyone, with the connection.” He was convinced the fit felt right from the start, and nobody would disagree now.

Rodgers has always been good for a soundbite, of course, but criticism of him in the past has tended to play the man rather than the ball. Opponents of his Leicester team have a relatable issue now; most of them spend large periods of a game chasing shadows as the spherical object is manipulated around them, or find themselves caught dozing as the Foxes’ front six hunt in packs.

Even accounting for the excellence of Liverpool and Manchester City, it is hard to pinpoint a better-balanced unit in the top flight; nor a manager who has been able to instil his vision with such clarity in a time frame this narrow.

It was instructive, in his analysis of Saturday evening’s 2-0 win, to hear Rodgers’ reasoning for introducing Demarai Gray on the hour. At that point the game appeared to be anyone’s and Arsenal could hold legitimate hope of at least stopping their rot with a point.

“We became too ‘basketball’ and that’s not how we play,” Rodgers said of the second half’s early stages. That kind of slippage from the “how” could not be tolerated so Gray was brought on to get Leicester back up the pitch and, 15 vastly improved minutes later, they had scored twice.

“It’s just having an idea and a plan beforehand of how the game might evolve; then, when you’re in the game, you have to make the quick decisions,” he explained.

What would Arsenal give, at this point, for a manager with Rodgers’ lucidness? Their embattled head coach, Unai Emery, did not make a substitution until the game had been lost. There is a growing sense they missed the boat in 2018, when Rodgers would surely have been receptive to an approach after Arsène Wenger’s departure was made clear.

Leicester’s opening goal on Saturday, a patient build-up of passes that sped up as it reached the box, culminating in a dazzling flick from Harvey Barnes and an ice-cool assist for Jamie Vardy by Youri Tielemans, would have blended into the scenery at Highbury and the Emirates until Wenger’s final few years.

Instead Arsenal were reduced to counterattacks – a gameplan that at least looked logical – for the majority of the night. Ricardo Pereira said afterwards that it was “a sign things are going well, teams show respect for us”.

Jonny Evans made a similar point, saying Leicester had needed to come up with a more assertive way of playing because they could not trade forever on catching teams napping as they did four seasons ago. That mistake is rarely made now; the problem is that few can live with the personality Rodgers has forged.

While Mesut Özil spent the final moments being chastised by his team-mate Matteo Guendouzi for shirking a 50-50 challenge, the home side’s playmaker and second goalscorer, James Maddison, was continuing to comb every blade of grass.

With Wilfred Ndidi and Tielemans, Maddison caps the most exciting midfield three in the country. Their snap off the ball and control after winning it – the outstanding Ndidi showed both in the buildup to Maddison’s strike – are formidable and the composure with which Leicester pick their passes around the area resembles that of a team far longer in the making.

“My idea was to open up the minds of the players and say: ‘Listen, you did achieve it [winning the league], and I’ll tell you why you didn’t go on and sustain it’,” he said. “But we’re here to try and create something that can be sustainable, and that’s about your mind as well as your quality.”

Leicester are a point better off than at this stage in 2015-16. The light really is back, both for them and for Rodgers. Meanwhile, a few bulbs might belatedly be going off in the minds of those Arsenal executives who passed over him in their hour of need.