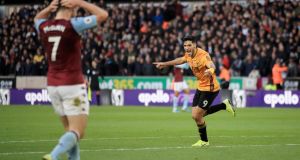 On Thursday Nuno Espírito Santo ordered Rúben Neves to do extra shooting practice after watching the midfielder fluff a penalty here in the Europa League. In the 41st minute of this Midlands derby, Neves demonstrated the value of that practice by firing the ball into the net from over 20 yards. That gave dominant Wolves a deserved lead, and Raúl Jiménez, after thrilling work by Adama Traoré, struck in the 84th minute to confirm the win that propelled Nuno’s team to eighth in the table. So much for Wolves’ season being undermined by their Europa League exertions. Trézéguet struck a nice goal for Villa in stoppage time but the outcome had been decided by then.

Wolves’ only defeat in their last dozen matches in all competitions was to Aston Villa in the Carabao Cup two weeks ago. A repeat of that never looked likely here, not least because the lineups were radically different. After fielding a youthful side at Villa Park, Nuno made 11 changes and deployed his top guns here. They fairly blew away Villa, who, in fairness, were also afflicted by rotten luck.

Centre-back Bjorn Engels and goalkeeper Tom Heaton were ruled out at late notice, Ezri Konsa came into defence for his first Premier League start and 27-year-old goalkeeper Jed Steer made his first top-flight appearance since May 2015.

Steer lasted all of eight minutes here, forced off by an achilles injury after backpedalling to try to claw away a cross by Matt Doherty, which ended up bouncing out off the crossbar. So Villa had to resort to their third-choice goalkeeper, Orjan Nyland, who has only recently returned from achilles trouble himself.

Some teams would have tried to test the new goalkeeper’s mettle by bombarding him with shots pronto. But Wolves very rarely deviate from their methodical approach so continued trying to slice and dice Villa with clever passing and movement. They were dominant, but Nyland did not have a save to make until nearly 20 minutes after his introduction. Diogo Jota did well to dart in front of Frédéric Guilbert to meet a cross by Adama Traoré but his header lacked power, allowing Nyland to save easily.

Wolves continually found space down the wings, especially on the right, where Doherty and Traoré thrived. Doherty howled for a penalty after tangling with Targett in the box following a snappy one-two with Jiménez. The referee saw nothing wrong with the challenge.

If it had been a penalty, Jiménez would have taken it. We know that because Nuno confirmed it on Thursday after seeing Neves botched spotkick in the Europa League victory over Slovan Bratislava. “He kicked it so bad he will have to practise a lot,” Nuno said of his compatriot’s effort after that game. Neves must be an obedient fellow. Because his excellent goal did not come off the cuff. After Tyrone Mings stopped a trademark Traoré charge with a desperate lunge, Moutinho enacted a nifty free-kick routine, playing a disguised pass from wide on the right to Neves at the edge of the D. Neves curled a sumptuous shot into the net Nyland got fingertips to it but a lot of good that did.

Villa had been toothless up to that point, now they would have to find some bite. They had coped fine without Jack Grealish against Liverpool last week, but here they sorely missed their maestro’s creativity. Their luck deteriorated before half-time, as an injury to Targett compelled them to make a second substitution.

Wolves, who tend to be far more dangerous in the second half of matches after softening their opponents up in the first, went in for the kill straight after the resumption. Traoré walloped a shot against the bar from 15 yards six minutes into the second period.

Villa did not work a clear opening until the 54th minute, when Anwar El Ghazi found Wesley in almost exactly the same spot as Neves had been when he opened to scoring. The Villa striker’s finish bore no comparison, sailing into the jeering hordes in the north bank.

Wolves should really have been out of sight by then. They continued to dominate after that chance. Traoré, an irrepressible danger, launched into another devastating run in the 64th minute, leading to a chance for Jota. Nyland did well to tip over his rasping shot from the edge of the box. Moments later Jiménez shanked wide and another shot by Jota was deflected into his path.

Wolves’ defence was not rattled until the 73rd minute, when Jonny Castro Otto resorted to a risky sliding tackle to dispossess Trézéguet in the box. Villa wanted a penalty but the referee was unmoved. One minute later he turned down similar appeals by Wolves after Traoré struck a cross against Neil Taylor’s left arm.

Traoré was inevitably involved in creating the goal that ended his former club’s resistance. The Spaniard skipped past Douglas Luiz down the right before measuring out a neat cross to Jiménez, who slotted into the net from 10 yards. It was just as well that he did, because Trézeeguet struck a fine goal for Villa in stoppage time, lashing a low shot over the line after collecting a corner beyond the far post. - Guardian

1 Johnny Sexton aware of how Ireland can offer fans an escape
2 Gerry Thornley: After 32 weeks the Six Nations is back up for grabs
3 Stockdale and Ringrose on board with expansive Irish game plan
4 Extremes of sweet and sour for Solskjaer as Man United show signs of revival
5 Here is your handy guide to sport on television this week
Real news has value SUBSCRIBE