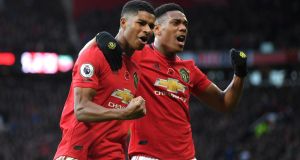 This was as entertaining a Manchester United display as there has been under Ole Gunnar Solskjær.

Midway through the second half the manager was regaled by fans with the song that pleads not to “take my Solskjær away” in recognition of the verve and vibrancy being witnessed.

There may have been a concerning weakness under the high ball and about United’s ruthlessness but, really, this was a convincing display of the Norwegian’s blueprint for his developing side.

It was also a memorable day for left-back Brandon Williams, who was excellent on his full Premier League debut. The 19-year-old came in for the suspended Ashley Young; Solskjær’s sole change from the loss at Bournemouth. For Brighton & Hove Albion, Graham Potter’s tweaks ran to two: Shane Duffy and Leandro Trossard chosen instead of Adam Webster and Pascal Gross.

From kick-off United were immediately where their manager wants them: on the front foot, with Marcus Rashford, Daniel James and Andreas Pereira taking the contest to their visitors. Even when defending, a muscularity was evident as when Williams refused Aaron Connolly any space, hustling one of Brighton’s two forwards into touch along their right.

When James raced down his wing the cross that followed came close to landing plum on Rashford’s head. A corner was claimed, Pereira delivered, and Scott McTominay nearly snuck in from a left-hand position.

This ilk of pace of thought and execution would dizzy the Seagulls until the end. Rashford saw the defence open up and found Pereira who stepped forward, before overrunning the ball.

Rashford had one of those days when he is close to unplayable, despite a second-half miss. When Pereira fed him on the left the No 10 flashed infield before his shot was saved low to Mathew Ryan’s left.

Next, though, United found the goal. Anthony Martial passed to Pereira and he drove at Brighton. After too many stepovers he seemed to have lost momentum only for the unfortunate Dale Stephens inadvertently hit the ball to Martial. The Frenchman’s first touch was clumsy but composure was retained and Pereira played in: the latter’s effort might not have troubled Ryan but Stephens’s deflection this time turned the ball in.

Two minutes later United had a second following a VAR delay. James was fouled by Lewis Dunk, who was booked. Fred took the free-kick, Harry Maguire and Dunk fought for the ball, and when it dropped Propper, under duress from McTominay, he registered an unwanted own-goal. After a noticeable delay VAR ruled Maguire had not impeded Dunk and United were coasting.

Required now was to ensure control remained. Instead a Maguire error near halfway led to a Brighton free-kick along the right. Trossard pinged this in, no red shirt cleared, and Dunk might have finished into a gaping goal.

United’s defence was again poor in the air when Trossard hit another dead ball over from the right as the interval neared. Connolly was free and, like Dunk, should have scored.

Fred has lately started to perform like his £55m price-tag suggests he should. A pass he flipped from within a crowd of players near his area was guided into James superbly and when the Welshman sprinted forward and crossed only Dunk’s clearing header denied Rashford a chance to make it 3-0.

More of the same with tighter defending might have been Solskjær’s orders for the second half. Potter acted by removing Martín Montoya and Connolly for Solly March and Glenn Murray.

United’s intent was illustrated by a Martial swivel and shot, then a James burst a little later. When Brighton tried to play out from the back the James-Martial-Rashford front-three were a rapid-pressing unit that allowed them scant time.

The sense was of United being hungrier than their opponents. Williams followed a yellow card for a high challenge on Steven Alzate by hunting down a throw-in and so Brighton’s only hope was if the home team might somehow implode.

On 64 minutes there was a glimmer. Fred’s fine performance was marred by a fluffed clearance that led to a corner on the left. Gross swung this in and, again, United were deficient in the air, Pereira losing Dunk, who powered home.

It did not stay 2-1 for long. Fred redeemed himself with a precise 30-yard pass that put Martial through. He turned the ball to Rashford and the striker drilled past Ryan off the bar.

This had Old Trafford jubilant and within seconds Rashford should have had a second. James’s speed took him clear down the right, he chose the correct option in finding Rashford, yet from three yards and Ryan stranded, the 22-year-old missed.

It did not deter him or his teammates, though. Williams saw his attempt saved by Ryan, then the keeper did the same with a James volley and, at the close, Rashford once more might have made it 4-1. This had been impressive from United, though McTominay limping off in added time was a concern. - Guardian