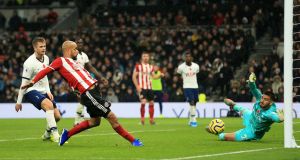 Tottenham produced yet another limp Premier League display as they stumbled to a 1-1 draw with Sheffield United that was marred by more VAR drama.

Spurs have endured a miserable start to their league campaign and it got no better against the Blades after Son Heung-min’s opener was cancelled out by George Baldock.

Baldock’s 78th-minute strike was the second time United had got the ball in the back of the net, but VAR scrubbed off the first after John Lundstram’s toe was ruled to be offside after a lengthy decision-making process.

It would not have been unjust if Chris Wilder’s men – still unbeaten away from home this term – had left the Tottenham Hotspur Stadium with all three points as they created the better chances.

Mauricio Pochettino spoke in the build-up to the game that his side can still finish in the top four, but after only three wins in 12 games they are simply not looking good enough and this will do nothing to quell the suggestion that this Spurs team has run its course.

United on the other hand are loving life in the Premier League and are sitting in the top six going into the third international break of the season.

Given previous struggles in their new home this season, Spurs would have killed for a good start, but again they found themselves off the pace as United looked dangerous early on.

Paulo Gazzanigga was called into action twice, first to tip Oliver Norwood’s deflected effort over the crossbar and then getting down well to keep out John Fleck’s low shot.

Spurs began to click, and could have led had Harry Kane not fluffed a chance at close range, but it was still the visitors that continued to have the clearer openings and Lundstram could have scored twice.

The midfielder, who did score a double in last week’s win over Burnley, first failed to make proper contact with Enda Stevens’s cross and then was denied by the woodwork as his shot from a recycled corner thumped into the post.

Spurs were riding their luck and were inches from falling behind six minutes after the restart.

Lys Mousset wriggled free in the penalty area and sent a shot that left most people in the stadium waiting for the net to bulge but drifted just wide.

That miss proved pivotal as six minutes later Spurs were in front, though there was a large amount of fortune attached to it.

Stevens inexplicably played a loose ball in own area that went straight to Son and the South Korean’s deflected shot went through the legs of Dean Henderson.

Just 129 seconds later, though, Sheffield United were celebrating an equaliser as David McGoldrick converted Stevens’s cross at the far post.

However, after a painstaking check at Stockley Park that lasted longer than the time between the two goals, Lundstram’s toe was ruled offside.

Spurs did not make use of their reprieve, though, beginning to play progressively worse and United got a deserved leveller.

There was a huge amount of luck involved, but it was worthy, as Baldock miscued his cross but it ended up bending in at the far post.

Spurs had a late flurry in an attempt to take the three points, but Dean Henderson was on hand to tip over Lucas Moura’s effort and it ended all-square, much to the annoyance of the home fans who roundly booed their team.

Ciaran Clark scored for the second time in a week as Newcastle came from behind to beat Bournemouth and secure back-to-back Premier League wins for the first time this season.

The Magpies were trailing to Harry Wilson’s well-taken opener at St James’ Park, but DeAndre Yedlin levelled with a powerful header with the break approaching and Republic of Ireland defender Clark, who scored in last Saturday’s 3-2 victory at West Ham, struck seven minutes after the restart to seal a 2-1 win.

However, although they continued to threaten on the break, the hosts also had to defend tenaciously in front of a crowd of 44,424 as the visitors fought all the way to the whistle in an ultimately vain mission to get something from an entertaining game.

Steve Bruce’s men head into the international break with 15 points from their first 12 games, a more than satisfactory return from a difficult run of fixtures, and sit just a point behind the Cherries, who started the day in seventh place in the table.

West Ham’s misery continued as Burnley ended their own poor run with a thumping win at Turf Moor.

Strikers Ashley Barnes and Chris Wood celebrated their new contracts with a goal apiece in the 3-0 win, with Wood having another chalked off by VAR.

The third goal was a calamity for Hammers goalkeeper Roberto, who was given a vote of confidence by Manuel Pellegrini on Thursday following criticism of his performances in the absence of the injured Lukasz Fabianski.

There is no medical term for a fear of corners but Roberto was all at sea all afternoon, with the nadir coming in the 54th minute when he pushed Ashley Westwood’s cross into his net for an own goal.

And West Ham’s miserable day was complete when Manuel Lanzini was carried off on a stretcher in injury time apparently with a serious injury after landing awkwardly following a foul by Westwood.

It is now six games without a victory in the league for Pellegrini’s team, whose slide down the table continues, while Burnley return to the top 10.

Marco Silva won the battle of the under-pressure managers as Everton piled more misery on Ralph Hasenhüttl’s Southampton with a 2-1 victory at St Mary’s.

Richarlison volleyed a 75th-minute winner to end the Toffees eight-match run without a Premier League away win and earn Silva a much-needed reprieve.

Saints, who have gone eight home matches without success, levelled through striker Danny Ings early in the second half after Tom Davies headed Everton ahead early on.

Hasenhüttl’s men remain entrenched in the relegation zone and were jeered off having suffering a fourth successive league defeat on home soil for the first time since moving to this stadium from the Dell in 2001.