Concern over Aaron Connolly ahead of Ireland’s Denmark date 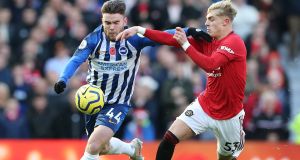 Darren Randolph and Glenn Whelan both look to be firmly on course to be available for Monday week’s critically important European Championship qualifier against Denmark in Dublin, after both were involved with their club sides over the weekend. However, there will be some concern about the fitness of Aaron Connolly after the young striker was replaced at half-time in Brighton’s game against Manchester United due to a groin strain.

Randolph earned praise from Middlesbrough boss Jonathan Woodgate for reclaiming his place in the Championship side’s starting 11 despite “not being 100 per cent” fit and the 32-year-old appears to have come through Saturday’s 2-2 draw against QPR without any significant issues.

Whelan didn’t get on as Hearts beat St Mirren 5-2 but the fact that he was even on the bench for the Edinburgh club will be seen by McCarthy as evidence that he is match fit, or close enough to it at least for him to be considered a potential starter for Ireland in a week’s time.

The manager is likely to get a better idea over the course of Monday of how much of an issue Connolly’s injury is. The striker was doing reasonably well despite Brighton trailing United 2-0 at the break but Graham Potter said he had to replace him as the Irishman was “feeling his groin a little bit”.

On Sunday night, McCarthy confirmed Connolly would undergo scans on Monday: "Aaron will have a scan on Monday morning,” he said.

“Our medical team have been in contact with Brighton and when we have the results on Monday, we will know more.”

Shane Duffy played all 90 minutes and elsewhere, the likes of Matt Doherty, who will almost certainly deputise for Seamus Coleman at right back, and Jeff Hendrick also played prominent parts for their respective sides.

There was also a first Stoke City start in more than a month for James McClean, as new Potters boss Michael O’Neill got his tenure off to a winning start against Barnsley.

John Egan did well again for Sheffield United, although Ciaran Clark will at least come back into the reckoning to start alongside Duffy at the heart of the Irish defence after another decent performance, that included another goal, for Newcastle United.

Alan Browne scored too with the Corkman getting his side’s second in Preston’s 3-1 win over Huddersfield Town but Conor Hourihane failed to get on as Aston Villa lost at Wolves and Robbie Brady got only a couple of minutes as Burnley beat West Ham 3-0.

David McGoldrick started and did well for Sheffield United against Spurs with the striker having a goal, set up by Enda Stevens, somewhat controversially disallowed after a VAR intervention, for an offside involving another player much earlier in the move, a decision McCarthy later described as “ridiculous”. Stevens was excellent despite an early error having contributed to Tottenham’s goal in what ended as a 1-1 draw.

The squad will start their preparations for Thursday’s friendly against New Zealand on Monday afternoon when they train together for the first time, and McCarthy will use that match to give game time to some of those who need it ahead of the showdown with the Danes.

The manager was in town over the weekend, meanwhile, for the Professional Footballers’ Association of Ireland (PFAI) end of season awards. McCarthy used the occasion to express support for Richard Keogh who was recently sacked by Derby County as a result of having been injured in a car accident after a drunken night out.

Keogh was a back seat passenger in a vehicle driven by a team mate and having been sidelined for a year or so due to the knee injury he sustained, he was dismissed after declining to accept a 90 per cent cut in pay until he is fit enough to play again. McCarthy said he was “astounded” by the series of events and said that the PFA, the English players’ union, was right to take the case up.

“I’m astounded at what’s gone on there, I really am,” he said. “I’ve only worked with him (Keogh) since December and he’s been brilliant, such a great guy. I know they have taken it on and so they should, that’s where they (players) really need help, in cases like that.”

Shamrock Rovers midfielder Jack Byrne, who McCarthy says will, like young Celtic full back Lee O’Connor get game time against New Zealand, won the PFAI’s player of the season award, with Danny Mandroiu of Bohemians picking up the young player prize.

Vinny Perth and Tim Clancy won the two divisional managers’ awards, Stevens and Denise O’Sullivan won the international awards and Rob Manley of Cabinteely was named as the First Division Player of the Year.