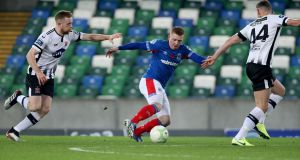 Linfield’s Shayne Lavery in action against Seán Hoare and Andy Boyle of Dundalk during the first leg of the Unite the Union Champions Cup at Windsor Park. Photograph: Brian Little/Inpho

The sponsors of this latest crack at a cross-Border cup had started the day by delivering 180 pairs of football boots to kids in Direct Provision centres down south as one part of the competition’s community dimension. “Celebrate the Difference” is the slogan they have adopted for the work and while it is unclear whether any actual bridges were being built here at Windsor Park, the two sets of fans certainly seemed to be revelling in their historical divisions.

The few hundred away supporters among the crowd of 2,819 kicked the proceedings off with a sort of musical instruction to insert flowery emblems into bodily cavities. The locals responded with a rendition of their national anthem which promoted a collective observation on their real nationality and their knowledge of the fact.

Unite’s General Secretary Len McCluskey, who was over from England for the occasion, might be forgiven for having concluded by the end that getting Jeremy Corbyn elected as the next prime minister will be a doddle compared to bringing Irish football fans together.

For those still intent on doing that in a wider way, though, the Northern Irish Football League had a message: “Our Football, Our Future” read the pitchside board directly beneath the Dundalk supporters. This was not, to be fair, an unanswerable demonstration of the feverish demand for more island-wide action but the venue does certainly seem like the sort of stage that should be hosting encounters between Ireland’s very best sides a little more often.

The two teams produced a decent first leg, one that firmly reinforced the impression that there is not an awful lot between the upper ends of the respective leagues, something Linfield had already provided evidence of during the summer when they eclipsed anything achieved by the Airtricity League sides this season in Europe.

Their starting line-up here suggested David Healy was intent on coming out ahead here too and though they seemed to start the game slowly, Shayne Lavery provided early evidence of why he has been causing such a stir in Irish League circles by scoring a very fine goal just nine minutes in to give the Belfast club the lead.

The 20-year-old showed great composure as he slipped the ball past Gary Rogers to score and though there were extended spells when he didn’t have an awful lot to work with, the shift the young striker put in was recognised at the end with the game’s Man of the Match award.

A week on from the FAI Cup final defeat by Shamrock Rovers, Dundalk seemed to lack a little bit of edge in some of the exchanges that followed and manager Vinny Perth had given starts to a couple of slightly peripheral players. Over the course of the game, though, they ultimately had the better of the chances.

After Andy Boyle had forced a fingertip save from Gareth Deane in the first half, Daniel Kelly got their equaliser early in the second and they certainly came closer to getting the night’s third goal with Georgie Kelly’s injury effort blocked short of the line.

Linfield’s determination not to concede late on was probably best illustrated by Mark Stafford’s challenge on Michael Duffy which was not necessarily the sort of thing you would expect in a match that didn’t matter.

That said, the Unite the Union Cup still has some way to go before it is clear whether it will be of any lasting significance or not. Monday’s second leg will tell us a little more but it will require the development of something a little more deep rooted than turning up to take some decent cash, to suggest this is not just the latest in a long line of these ventures to end up having a pretty short shelf life.

As to whether it really can be a foundation for something bigger, that still depends on Kieran Lucid’s ability to put in place the building blocks required to persuade the clubs he is genuinely on to something and then head off the efforts of the game’s governing body north of the border to knock them down again.

The one thing you would have to say here, however, is the fans seemed to rather enjoy celebrating their differences in song.

1 Shels chairman Andrew Doyle hits out at ‘appalling’ FAI governance
2 Heroic insanity: When Michael Dunlop raced home in memory of his father
3 Players focus more on life outside game due to lockdown, says GPA
4 No point forcing people to take a knee, says Anthony Watson
5 Follow the money: How FBI and IRS teamed up on Fifa
Real news has value SUBSCRIBE
Crossword Get access to over 6,000 interactive crosswords