Fulham and Cardiff stay deep in the mire 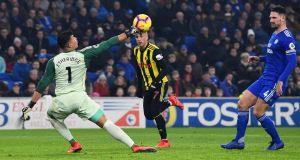 Gerard Deulofeu’s first hat-trick in English football saw Watford stroll to a 5-1 victory at Cardiff and climb to seventh place in the Premier League. Deulofeu, recalled to the Hornets’ starting line-up after sitting out the FA Cup win at QPR, fired Watford into a first-half lead before scoring twice in as many minutes just after the hour-mark.

Troy Deeney added further gloss with two more - his first league goals since the start of January coming either side of a Sol Bamba consolation. Despite their second-half collapse, Bluebirds boss Neil Warnock will no doubt feel that his side should have been awarded a 42nd-minute penalty with the score at 1-0.

Josh Murphy had just made his way into the area when Daryl Janmaat clattered him from behind, but referee Simon Hooper was unmoved to frantic Cardiff appeals as he waved play on.

The heady heights of seventh was the prize for a Watford win, and the omens were good with Gracia’s men having lost only one of their previous 10 games and fresh from reaching the last eight of the FA Cup. The visitors went ahead when Morrison, Bruno Manga and Joe Bennett all tried, and failed, to dispossess Deeney and Deulofeu took charge of the loose ball to bury a low shot.

Deeney almost doubled the lead from 20 yards, this time Etheridge getting a hand to the shot, and Warnock was incandescent on the touchline when Murphy was felled and nothing was given. Cardiff changed formation at half-time with Bacuna and Bennett operating as wing-backs, but Watford still looked the more polished side as Bamba blocked Deeney’s goalbound effort.

The energy of substitute Junior Hoilett gave Cardiff brief hope, but Watford soon sprang a counter-attack and Deulofeu beat Manga to run half the length of the field. Deulofeu rounded Etheridge with ease and two minutes later he burst on to Etienne Capoue’s threaded pass to chip the Cardiff goalkeeper.

The Spaniard was not finished there, though, and he skipped through after 73 minutes to provide Deeney with the simplest of tap-ins. Bamba came up with a consolation by bundling home from a goalmouth scramble eight minutes from time, but Deeney pounced again in the dying moments when Will Hughes set him up from close range.

Fulham were given a helping hand towards relegation by Javier Hernandez as West Ham came from behind to secure a 3-1 victory. Hernandez cancelled out Ryan Babel’s early strike by jabbing the ball in with his hand the far post. It was a punch that knocked the stuffing out of Fulham, especially after it was replayed on the big screens to the dismay of the travelling fans.

Referee Lee Mason and his assistants missed it but video technology would have surely seen the goal disallowed, adding yet more weight to the ‘pro-VAR’ case. That will be scant consolation to Fulham boss Claudio Ranieri, though, as his struggling side crashed to goals from Issa Diop and Michail Antonio.

Another defeat left the Cottagers eight points adrift of safety with just 11 matches to go, and that bleak picture could look even worse after the weekend fixtures. Yet West Ham started the match as if they were still at last weekend’s warm-weather training camp in Marbella, almost gifting Fulham a goal after just 35 seconds.

An under-hit backpass from Pablo Zabaleta sent Babel through on goal but he was unable to beat Hammers goalkeeper Lukasz Fabianski from close range. Babel did not fluff his next opportunity, however, tapping in a cross from Jean Michael Seri to give Fulham a third-minute lead.

Fulham have yet to win away all season but they sensed West Ham might be a little more accommodating than most. However, not for the first time their defending from set-pieces let them down badly. Diop went close to an equaliser when he headed wide before the Hammers hauled themselves level with Hernandez’s controversial 29th-minute goal.

The Mexican bundled the ball in at the far post after Fulham keeper Sergio Rico flapped at a corner and Angelo Ogbonna helped it on. It was a 50th Premier League goal for former Manchester United striker Hernandez, all of which have come from inside the penalty area - but unfortunately for Fulham at least one of them was scored with his hand.

West Ham took the lead in the 40th minute when centre-back Diop was somehow allowed a run-up to score with a header from another Robert Snodgrass corner. Bafflingly for a team supposedly fighting for its life, Fulham offered precious little in the second half. West Ham were able to give a late cameo to Manuel Lanzini, the Argentinian’s first appearance of the season following a torn ACL.

Fellow sub Marko Arnautovic was denied a goal by a fine save from Rico, but he set up Antonio for the killer third in stoppage time as Fulham were shoved another step closer to the Championship.