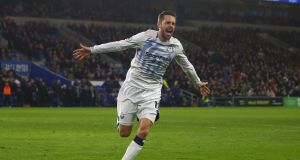 A first half low on quality was illuminated by one flowing move in the 41st minute which ended with Sigurdsson firing low into the corner after being picked out by Séamus Coleman.

Cardiff showed more tenacity in the second half but were deflated in the 65th minute when Sigurdsson lashed home his second of the night past Neil Etheridge.

Dominic Calvert-Lewin got his name on the scoresheet in stoppage time to complete a comfortable Everton victory.

Defeat left Cardiff one point and one place above the relegation zone and they will drop into the bottom three if Southampton beat Fulham at home on Wednesday.

Bottom club Huddersfield Town earned just their third win of the season as a stoppage-time goal from Steve Mounie gave them a 1-0 victory over Wolves at John Smith’s Stadium.

Huddersfield had piled on the pressure in the second half but were unable to find a way through until Aaron Mooy’s cross found Karlan Grant at the back post.

Grant’s shot was saved by Wolves goalkeeper Rui Patricio but Mounie pounced on the loose ball to bundle home the winner.

Mounie had earlier gone close with a header into the side netting while midfielder Jonathan Hogg headed over from a Grant cross.

Huddersfield have 14 points but remain in last place, 11 points behind Cardiff City.

Swiss defender Schar smashed a fierce drive from 28 metres off the inside of the post and past a helpless Burnley goalkeeper Tom Heaton to put the Magpies ahead in the 24th minute.

Home goalkeeper Martin Dubravka then did well to keep out a volley from in-form Burnley striker Chris Wood after a rare spell of pressure from the visitors.

Burnley defender James Tarkowski missed a great chance from close range shortly before the break but Sean Dyche’s side were well below-par and struggled to create chances in the second half.