Steve Holland an option for Chelsea if they sack Sarri

England assistant manager could take over until end of season 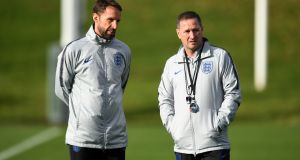 Holland is believed to be Chelsea’s favoured option to take up the reins for the remainder of the season.

Chelsea would consider approaching their former coach and current England assistant manager Steve Holland to help steady the ship on an interim basis if they call time on Maurizio Sarri’s tenure at the club over the next week.

Sarri, who is seven months into a three-year contract, is clinging to his job despite the team’s progress into the last 16 of the Europa League on Thursday night. Recent humiliating defeats by Manchester City and Bournemouth have eroded confidence in the Italian, who faces pivotal games against City in Sunday’s League Cup final and Tottenham in the Premier League next Wednesday.

Meek defeat in either of those matches is expected to see the head coach sacked, with Holland believed to be Chelsea’s favoured option to take up the reins for the remainder of the season if he can be persuaded to combine his duties with the national team with those at the club. He would expect a prominent and hands-on role. The Football Association would need convincing that the 48-year-old could fulfil club and international roles simultaneously, as he did for the majority of the 2016-17 season following Gareth Southgate’s appointment as England manager.

His departure to take up the role with the national setup in the summer of 2017 ended an eight-year association with Chelsea, from reserve and development level into the first-team coaching structure. He had also spent three years as Southgate’s assistant with the national Under-21s while working with the likes of José Mourinho and Guus Hiddink at the Premier League side. Holland attended Chelsea’s FA Cup fifth-round defeat by Manchester United last Monday as well as Thursday’s Europa League win over Malmö, and even watched the Uefa Youth League victory over Monaco at Cobham this week.

Chelsea, who insist they have not held talks with any potential successors to Sarri, could point to the leeway they granted Holland to combine his duties with the national setup should they open negotiations with the FA over a possible return. England play only twice this season, in Euro 2020 qualifiers against Czech Republic and Montenegro late next month, before they begin preparations for the summer’s Nations League semi-final against the Netherlands in Portugal.

Gianfranco Zola, who joined Sarri at Chelsea last summer, had been mooted as a possible caretaker manager to see the side through to the summer, if required. However, the 52-year-old has suffered complications after gallstone surgery of late, and has missed the team’s last two fixtures. There would be reservations within the setup, too, over his suitability to take up the coaching position.