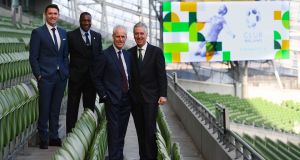 A decade on from the launch of the Vantage Club ticket scheme that it hoped might pay its share of the cost of redeveloping Lansdowne Road, the FAI is putting the same seats up for sale again, at a fraction of the price.

Just as boom became bust in late 2008, the association was asking between €12,000 and €32,000 for 10-year tickets for the 10,000 premium level seats it had to sell at the stadium. At what is now the Aviva Stadium on Wednesday, John Delaney announced that the seats will now be marketed under the banner “Club Ireland” at a flat rate of €5,000 for 10 years.

For that, buyers can expect five senior men’s internationals a year, plus a selection of other games and events. The offering, which Mr Delaney now describes as the “best in Irish sport”, compares with the IRFU’s €12,000 10-year scheme, which includes five to six rugby internationals per year, and Croke Park’s €13,500 plan for perhaps three times as many high-profile games, though the three organisations all offer broadly comparable packages over shorter periods of time.

The Vantage Club pricing was greeted with widespread scepticism at the launch of the ill-fated scheme, but the CEO of ISG, the international sports marketing firm recruited to advise on and then oversee the project, remained bullish. Despite the sudden economic downturn, insisted Andrew Hampel, there would be plenty of people who “still want to be seen at the front of the aeroplane [and] these seats are the front of the aeroplane”.

“I think in terms of the Vantage Club it’s important to say that mistakes were made 10 years ago,” said Mr Delaney at the Club Ireland launch. “The pricing was based on solid advice from major international bodies at the time. The pricing was wrong, obviously, because the recession began to bite. And I think, to be very clear, lessons have been learned and this time the pricing is realistic.”