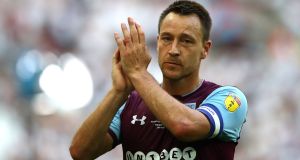 John Terry is set to complete a surprise move to Spartak Moscow after reportedly accepting a two-year deal with the Russian side. The former Chelsea and England captain had been without a club since his contract with Aston Villa expired at the end of last season.

Terry was due to appear in a charity match on Saturday at Celtic Park but pulled out in order to undergo a medical in Rome before his move to the Russian capital. Spartak, currently second in the Russian Premier League, are managed by Massimo Carrera, who worked under Antonio Conte at Juventus and with Italy.

The Russian side tweeted what looked to be a teaser of Terry’s move on Saturday. The tweet featured a picture of a group of people arriving at the club’s museum, with the text: “A very important guest … who could it be?”

Spartak will be the fourth side the 37-year-old defender has represented at club level. He joined Chelsea as a teenager and, after a brief loan spell at Nottingham Forest, went on to captain a senior side that won five Premier Leagues, five FA Cups and the 2012 Champions League before departing to spend last season at Aston Villa.

He has also made 78 appearances for England but has not been capped since 2012 when he was stripped of the England captaincy after being found guilty by the FA of racially abusing the QPR defender Anton Ferdinand. Terry has bad memories of Moscow, after missing a penalty in the 2008 Champions League final.

In an interview with the Mail published online on Friday, Terry said he is still “hungry to play” but that becoming manager of Chelsea formed a part of his “five to eight-year plan”.

Spartak are competing in this season’s Europa League and are in the same group as Steven Gerrard’s Rangers – although Terry’s arrival comes two days after the cut-off for teams to announce their squads. – Guardian service