Ryan Giggs: Our focus is on Ireland not Danish stand-off 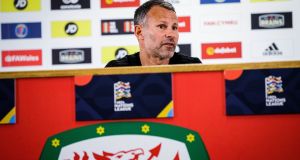 Wales manager Ryan Giggs admits that he never seen anything like the stand-off between the Danish FA and its international players but says he and his players need to focus on Ireland before worrying about what sort of side they face in Aarhus on Sunday.

“Obviously you are hoping that they will sort it out although with each passing day it is looking less likely,” said the former Manchester United star at his pre-match press conference at Cardiff City stadium on Wednesday. “What sort of team they are going to play I don’t know. I’ve got an eye on it but I’ve got a big game tomorrow.

“I don’t know the details (of the Denmark situation). I don’t know the ins and outs so it is hard for me to comment but they are a top 10 team so it’s strange. They did well at the World Cup.

“As a footballer you just want to play but then if you don’t think you are getting a good deal or, from the other side, if the federation thinks that you are . . .

“It’s not ideal obviously. But the problem is that Danish federation have to put out some sort of team. After what happened with the women (whose World Cup qualifier against Sweden last year had to be cancelled due to another financial dispute) they could be out of international football for four years so they have to put out some sort of team and the Superliga teams aren’t releasing players so I don’t know; we’ll deal with it after this which will be a tough game.

“Ireland are unbeaten in their last six away games. We know what we are up against; we know they are going to make it hard for us.”

Giggs acknowledged that his opposite number, Martin O’Neill, has had his problems in the lead up to this opening Nations League match but insists that he does not expect a significantly easier time of things because players like James McClean, Shane Long, Robbie Brady and James McCarthy are missing.

Giggs laughed off a suggestion that Harry Arter had pulled out of the squad after a falling out with Roy Keane. “Noooo,” the 44 year-old said while shaking his head in mock astonishment. “I don’t believe it.

“Look, I don’t know. He was a brilliant team mate. I enjoyed my time with him at the World Cup, him and Martin. All I can say, about Roy as a person is that I get on really well with him and I’m looking forward to meeting him tomorrow.”