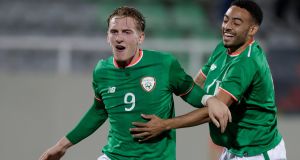 Ireland’s Reece Grego-Cox celebrates with his teammate Ronan Curtis after he scored the equaliser against Kosovo in the under-21 European Championship qualifier. Photo: EPA

Ronan Curtis has been rewarded for his form since joining Portsmouth in the summer with a call-up to the senior international squad for Tuesday’s friendly international in Poland.

The 22-year-old has made a remarkable impact since moving to England from Derry City in the summer with five goals in six League One games and he also scored Ireland’s late equaliser in the under-21 qualifying game against Kosovo on Friday but is suspended for Tuesday’s meeting with Germany.

Stephen Ward, meanwhile, has returned to Burnley to receive treatment for the foot injury picked up in the 4-1 defeat by Wales. Jon Walters had already left the squad on Friday with manager Martin O’Neill accepting that the 34-year-old needed to recover from the effort of playing 90 minutes in Cardiff.