Marcus Rashford the bright spark on sobering night for England 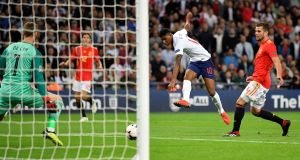 England’s Marcus Rashford has a shot at goal during their Nations League meeting with Spain at Wembley. Photo: Toby Melville/Reuters

Gareth Southgate must have feared the homecoming might turn out this way, with a slap in the face to shrug the nation out of all the giddiness of the summer’s exploits. The Nations League will clearly have the capacity to thrill, the tempo and edge to this contest so much more appealing than a humdrum qualifier against a minnow’s massed defence. But this young side’s development will have to continue in the unforgiving environment of competitive fixtures against pedigree opposition.

The frantic finale, when Danny Welbeck thought he had equalised and Spain, for the first time, appeared rattled as England reverted to more direct and desperate tactics, did not hoodwink Southgate into thinking his team had properly matched Luis Enrique’s side. He knew complaints over a refereeing oversight merely masked reality. Spain were the better team and this had been another education: the 11th match under Southgate against opponents ranked in Fifa’s top 20 which has not been won in normal time. And another occasion against elite opposition when the finer details, those which give the best an extra edge, had made all the difference.

It had been the same in Kaliningrad, St Petersburg and Moscow over the summer, when Belgium – twice – and Croatia had imposed themselves on Southgate’s charges and their class had duly told. It was evident most obviously at the back in that first period, with England deceived by that early lead. Witness Luke Shaw diving in unwisely while the adrenaline was still pumping from his glorious assist two minutes earlier to allow Dani Carvajal passage down the right. That contributed heavily to the shipping of the equaliser. Then there was the indecision which gripped the backline at Thiago’s free-kick just after the half-hour – Joe Gomez was cleverly blocked off, while John Stones and Harry Kane were static, allowing Rodrigo to dart beyond him to the near-post – which saw the hosts fall behind.

It was also illustrated by the ease of Spain’s possession and the calm authority across their midfield, where Sergio Busquets was imperious and Thiago and Saúl Ñíguez utterly irrepressible. Their use of the ball contrasted markedly with England’s toils, though it was Spain’s ability to regain possession which will have infuriated Southgate. His own side rarely snapped into their press as effectively, despite all the work the coaching staff had been putting in on that aspect of their play up at St George’s Park in the buildup.

Southgate was asked if it is realistic to expect his team to bridge that chasm before the next European Championship. “It’s very difficult to say,” he offered. “We’ve got some players who can and have shown tonight they can perform at that level, and others who are still a work in progress. We have 19 matches, so that’s not very long. But we have the best group of players in the country here and we have to keep faith in the way we’re trying to play, otherwise we go back to what we did historically. And there’s no way we’ll ever be a top team if we do that. We have to be brave enough to stick to our principles and identify how to improve. But that won’t be easy. You can see the level of the top teams. I said that in the summer. We have to be prepared for that challenge.”

It will not be much easier next month against Croatia, the team who shattered the dream at the Luzhniki. England, certainly, will have to take the chances they carve out in Rijeka if they are to revive their challenge in the three-team section. Kane was off colour up front here and England’s most potent attacking threat was his strike partner Marcus Rashford, whose conversion of a slick opening goal had set such an upbeat tone and had Southgate purring on the sidelines.

That goal had been everything this team is aspiring to be: all calmness under pressure deep inside their own half with passes pinged between John Stones and Kieran Trippier, via a clever flick from Jesse Lingard, Jordan Henderson’s strength and Kane’s liberation of Shaw down the left. The wing-back’s centre was sumptuous as it veered beyond Dani Carvajal and Nacho. There was Rashford, bursting unnoticed on to the defender’s back, to convert first time beyond a startled David de Gea.

Yet that should have been the first of three. It may be harsh to criticise a player who consistently unsettled the Spanish with his slippery pace and menace. But against this calibre of opposition he had to bury his header from Lingard’s clipped centre beyond De Gea, and finish off Kane’s pass which sent him through on goal late on, if England were to have any chance.

The goalkeeper’s saves simply ended reminders of what might have been, for all that Rashford could cling to a first competitive goal in a little over a year. But that summed it up. England were left seeking solace in consolation. This was a reminder they have a long, long way still to go. – Guardian service