Barcelona’s league meeting with Girona could take place in Miami

Javier Tebas, head of La Liga, said there’s a 90 per cent chance it will be played in the US 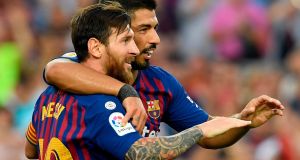 La Liga chief Javier Tebas has said there is a 90 per cent chance the first Spanish top flight game in the United States will be Girona’s ‘home’ match against Barcelona in January and revealed the league will earn €200m for playing games in North America.

Tebas added that Girona’s joint majority shareholders Manchester City had encouraged the Catalan side to get involved in the initiative, part of a 15-year deal the league signed with US entertainment company Relevent last month, while stating that no club was obliged to play games in the US.

“Girona-Barcelona will 90 percent be played in the United States, but the agreement is not about just one game, it’s about a process which is much bigger,” Tebas said in an interview with Spanish radio station Onda Cero broadcast on Friday.

“We held a bidding process and various companies got involved. There’s no obligation for teams to play one game a year in the United States, only the clubs who volunteer to go will go.

“But this is much more than a game, it’s about strategy and sponsorship.”

The game will deprive Girona of a home fixture with Tebas confirming reports that the club’s fans will be offered free flights to the game, set to take place at the Miami Dolphins’ 65,000-capacity Hard Rock Stadium in Florida.

Reuters was awaiting a response from Manchester City and Girona after Tebas confirmed the Premier League champions had encouraged the club to get involved in the first US match.

“The game is designed to help teams that don’t have a very big fan base,” Tebas added.

“Girona are partly owned by City and together with (Miami Dolphins owner) Stephen Ross, they told us Girona were interested in playing this game.

“Now several teams with a similar profile to Girona have shown interest because they see it as an opportunity. Season ticket holders will be compensated and there is an opportunity to travel to Miami. Relevent will pay the costs.”

Girona, who were promoted to the top flight for the first time in 2017, said they had received the offer to play the game against Barcelona but it had yet to be officially confirmed.

“The club has accepted this offer, understanding that it is a great possibility to expand and grow, not only for the club but also for our city and our territory,” a statement on the official Girona website said.

“Three years ago, the club was fighting against going out of business and now our objective is to consolidate ourselves in La Liga.

“This action would be another step in competing in football’s elite after all the efforts we have made and which has led to us being promoted to the top flight.”