Denmark may play amateurs against Wales as dispute deepens 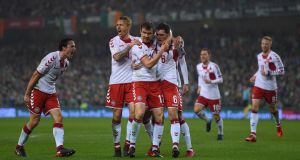 Denmark may be forced to play amateur players against Wales in their Nations League clash. Photo: Mike Hewitt/Getty Images

As the dispute between the Danish Football Federation (DBU) and its senior international squad deepened on Monday, Martin O’Neill’s old friend Age Hareide might be forgiven for wishing he only had problems with two of his players declining to turn up for this week’s games.

Instead, members of his team were meeting at a Copenhagen hotel in order to discuss the increasingly bitter stand-off with the DBU which had spent the day appealing to clubs in the country’s top three divisions for players willing to fulfil this week’s fixtures against Slovakia and Wales.

The latter is a Nations League game, the second in Ireland’s group, and while Uefa have apparently made it known behind the scenes that they are unconcerned about the strength of the team that the Danes field for the game, they have warned the Danish federation, which was forced to cancel a women’s qualifying last year, that the game must be played.

When the women’s game against Sweden was cancelled last year, the DBU was told that if it happened again within four years they would be thrown out of the qualifying tournament and the Danes now fear that such a ban would extend beyond the Nations League to the qualifying competition proper for the next European Championships.

The dispute relates to the renegotiation of a commercial agreement between the association and the players. The previous one, struck in similarly difficult circumstances three years ago expired over the summer and while talks have been ongoing with the players’ union since the start of the year, no agreement has been reached.

The players offered a few days ago to play these two games on the basis of the terms agreed last time around but the federation apparently feels that that was a bad deal which only got worse as each dispute was resolved in favour of the squad. Its fear is, it is suggested, that if it was agreed to extend it now a precedent would be set and there would be no incentive for the players to agree a replacement.

Problems have arisen on a number of occasions due to personal sponsorship deals that players have which conflict with the DBU’s agreements and, after the team captain Simon Kjaer appeared in a major advertising campaign for gambling firm NordicBet around the World Cup when the association has an arrangement with a rival firm, matters have come to a head.

It was revealed over the course of Monday evening that the federation is now suing NordicBet for one million Danish Krone (about €135,000) in relation to the campaign which, it says, infringed its intellectual property rights. The players, it is suggested, want a free hand to sign any commercial deal they choose to.

“Unfortunately, it is a bad negotiating climate,” Huddersfield Town defender Mathias Jorgensen told reporters on the way into the meeting after having arrived in a Fiat 500 with international team mates Viktor Fischer and Lasse Schöne. “We must of course hope that it will improve soon for Danish football. And so, of course, we hope that DBU will come back to the table.”

Jørgensen dismissed a suggestion by senior DBU officials that the players are being greedy. “If you think so,” he said, “it’s because you have not got into things.”

Still, the DBU seems determined to press ahead. With professional players from the lower leagues apparently intent on showing solidarity with the national team regulars, however, the possibility has been raised of selecting amateur for the games this week and the DBU has already said that if the dispute is not resolved in time then Hareide will play no part in either game.

Gordon D’Arcy: Time for IRFU to be bold and secure futures of prized playing assets 06:00
Van Graan outlines challenge Munster faces against Leinster’s ‘pressurised game’ 06:00
Bundee Aki’s Connacht return could come against Ospreys on Sunday 06:00
Seán Moran: Improvisation may be on the cards again for fixture makers 06:00
Shane Lowry well aware that silence can be golden at times 06:00