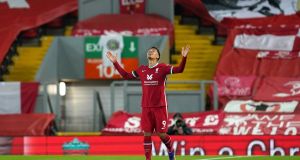 A limited audience will again be welcome at games in the Premier League next week. Photograph: PA

Crowds of up to 4,000 people will be allowed to return to sporting events in England from next week, and grassroots sport will also return, as part of an easing of coronavirus measures announced by the British prime minister.

Boris Johnson told the House of Commons that “we must get through winter without the virus spreading out of control”, as he laid out an adjusted set of tiered restrictions that will come into force following the end of their national lockdown next week.

The news of a return of spectators will be widely welcomed by professional sports organisations who have been entirely deprived of their main source of revenue for much of the year. The new measures will stop some way short of stemming losses altogether, however.

Spectators will be allowed back into both indoor and outdoor events in Tier 1 and Tier 2 regions, dependent on limits to the size of crowds and the enforcement of social distancing.

The proposed rules would see 4,000 spectators allowed into outdoors events in Tier 1 areas, or 50 per cent of capacity depending on which is smaller, and 1,000 in indoor events. In Tier 2 that number will be capped at 2,000 and again 1,000 indoors. In Tier 3 spectators will remain banned altogether.

Commenting on the new guidelines the British culture secretary, Oliver Dowden, said they were “taking a cautious approach” to the return of crowds.

“I’m confident that sports will take every step to ensure their fans are safe, and fans will play their part and look out for each other until we can safely get everyone back in”, he said.

Johnson said that the inconsistency which had allowed people to watch a film in the cinema but not a rugby match in a stadium, a frequent point of complaint for campaigners, had played into the change in approach.

There remains substantial uncertainty as to which parts of the country will fall into which tiers. His decision on tiers is likely to be announced on Thursday, but that “we expect more regions will fall at least temporarily into higher tiers than before.”

There was good news across the piece for grassroots sport however, with outdoor sporting activities allowed to resume and both leisure centres and gyms allowed to reopen across all tiers from next week.

The British health secretary, Matt Hancock, who was answering parliamentary questions on the new guidelines in the absence of Johnson, admitted he had received “significant representations” from those arguing that the benefits of allowing sport to continue during the pandemic.

The chief executive of Sport England Tim Hollingsworth said: “Today’s news is very welcome for everyone who has so badly missed the usual opportunities to play sport and keep active.”

“Huge credit is due to the many organisations and individuals who have worked so hard to evidence how safe their activities and facilities are and to set out so clearly what they are doing to reduce risk.

“From the prime minister down, there is now a strong recognition of the vital benefits of playing sport and being active, not just for your physical wellbeing, but also crucially as a support for your mental health. As we head into the winter months having a range of safe opportunities available like this is more important than ever.” - Guardian