Stephen Kenny is no Howard Wilkinson, Paul Pogba wants out of Manchester 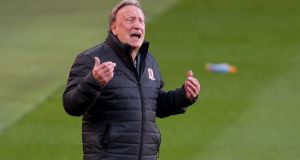 Kenny is no Wilkinson

“Everyone in a flap about Stephen Kenny’s video,” Thomas Butler tweeted last week, “that’s nothing compared to Howard Wilkinson showing us a video on geese flying in formation [anguished-face-emoji]. I know which video I would have preferred.”

To which people too young to remember Wilkinson’s time in management might well have replied: “Huh?”

It’s true, Wilkinson, the last English manager to win the top flight title in England (with Leeds in 1992), had a rather unique style, one Butler, the former Republic of Ireland international, experienced when he was his boss at Sunderland.

It was a few years back, when he spoke to the Newcastle Chronicle, that Phil Babb, who also had a brief spell under Wilkinson at Sunderland, shared the yarn.

“He said ‘I want you to think about the best team ever, and we are going to come in and watch a DVD tomorrow morning’. So I was thinking ‘Great, a morning off, we’ll watch a bit of AC Milan in the 80s’. He presses play and it fades out from the black screen to a wedge of geese migrating down south and he said: ‘Right lads, that’s the best formation and the best team you’ll ever see. Every single one of them are captains. If one gets injured another two will drop down with it and that’s what we want you to be, like these geese. Quinny [NIALL QUINN], go and take the lads out for a warm up.’ So we start jogging and after about two minutes Quinny looks over his shoulder and goes: ‘Right lads, geese formation’, so we all got our arms out and started honking away.”

Sadly, they then honked their way to relegation, their goose cooked.

“People might look where Ireland are and think, ‘well, it can’t get any worse’. I think it will.” Roy Keane, doing his best to cheer us all up.

“Imagine if I’d said yes - everybody would have been voting for me to do every bloody thing. Will it happen in the future? Let’s play it by ear.” Middlesbrough gaffer Neil Warnock revealing that he was once offered a spot on ‘I’m a Celebrity… Get Me Out of Here!’, and that he might accept a future invite. He’ll be eating crocodile testicles for the duration of his appearance.

“The French national team is a breath of fresh air... we are very happy to come here and all very happy to see each other again. It is not the same as with the club... we all group together, it is magical.”Anyone would think Paul Pogba wants out of Manchester United.

“I think we live in an era where you can hardly scratch your arse without it ending up on social media or YouTube.” Shels (amongst others) legend Stuey Byrne’s take on Stephen-Kenny-video-gate.

Vinicius on the bench

Having been left out of the Brazil squad for their two games in October, Real Madrid’s Vinicius Jr would, no doubt, have been chuffed to have been called up by manager Tite for the recent World Cup qualifiers against Venezuela and Uruguay.

Spanish paper Marca got out their calculator to figure out how many air miles he totted up on the round trip which was made up of five legs - Madrid to Rio de Janeiro, Rio de Janeiro to Sao Paulo for the Venezuela game, Sao Paulo to Rio, Rio to Montevideo for the Uruguay game, and Montevideo back to Madrid.

How many minutes of game time did he get? Eh, zero. He sat on the bench for the entire duration of both games.

Mind you, spare a thought for the three other European-based players who didn’t get a minute’s playing time either - Seville’s Diego Carlos, Atletico Madrid’s Felipe and Liverpool’s Alisson. At least Vinicius could get flippin’ direct flights to and from Madrid.

“I just don’t get the hype around him to be perfectly honest...... he wants to have around 35 touches ... he goes left, right then flicks it back to somebody. You’re left thinking ‘really?’” Paul Parker, not yet a fully paid up member of the Jack Grealish fan club.

“We we all know that at Barca first is Messi, Messi, Messi... 50 Messis. At Atletico, Greizmann was God. At Barca, he can be a duke or a count.”Atletico Madrid old boy Paulo Futre on the chances of Antoine achieving God-like status at Barca while Messi’s still there: none.

“GOAT!” AC Milan’s Rafael Leao hailing Zlatan Ibrahimovic on Instagram - not for his goals, for the Swede gifting every one of Milan’s 27-strong squad a new Playstation 5. (In case you were wondering why you couldn’t get your hands on one last week).