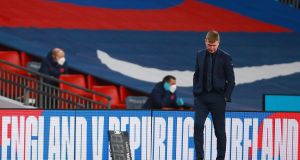 James McCarthy has been ruled out of Ireland’s two Nations League games with manager Stephen Kenny confirming on Saturday afternoon that the Crystal Palace midfielder will not return to the squad in this window, having left it during the run up to the England game for family reasons.

Kenny said in the aftermath of that game that the 30-year-old had received “bad news” but was unsure at the time whether the situation might develop in a way that allowed the player to return.

McCarthy joins Seamus Coleman, Aaron Connolly, John Egan, Callum Robinson and Harry Arter in having dropped out of the squad for one reason or another in recent days. In their places have come Jack Byrne and Ryan Manning, Josh Cullen, Jason Knight, Ciaran Clark and Darragh Lenihan.

“We have 25 players in the squad now,” said Kenny prior to training on Saturday afternoon in Cardiff “good players and everyone that we have is fully fit so we are ready to play the games against Wales and Bulgaria.

“I think everyone is disappointed to have lost the other night but it was a difficult game; England were in good form and it was probably the first game that we haven’t been dominant for long periods. But we have a quick turnaround and the Nations League games were always the priority.

“We are preparing for tomorrow. Wales are a very good side but we played quite well in the game against them in Dublin where we created the better chances and were marginally the better side overall.

“There are lots of changes to the team but we are very focussed and we will be looking to win the game tomorrow.”

Kenny admitted that it has been hard at times to handles the setbacks he has encountered since taking on the senior role and disappointing to see the side struggle to a first win but he insisted that he has not been remotely disheartened.

“It has been a tough period I won’t deny that, this month and last in relation to all that has gone on but I’m not complaining about that,” he said. We have to deal with it. We have to dust ourselves down and just get on with it.”

Matt Doherty had said at Wembley that he was embarrassed coming off after losing games but Kenny said he had listened back to what had been said and had no problem with it.

“I haven’t spoken to him about it but I listened to what he said and what he said is perfectly fine. He said he is embarrassed to lose a game and I have no issue with that.”

Gareth Bale is likely to start the game with interim manager Rob Page suggesting that the 31-year-old is in excellent shape thanks to getting first team football again since returning to Tottenham from Real Madrid on loan.