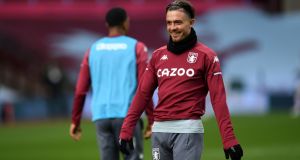 That old line about FAI standing for ‘Find An Irishman’ has taken on a new twist of late. Stephen Kenny has to deal with so many withdrawals these days that barely a stone is left unturned in the search for replacements who are in some sort of shape to travel then play. Jonny Hayes, Derrick Williams and Shane Long all had to decline late call ups in recent days, the manager revealed on Wednesday.

The options would be wider but for the number of previously eligible players who might be line out for the home side at Wembley. Michael Keane, Reece James and Jack Grealish are all expected to start for England on Thursday evening while Declan Rice, Harry Kane and 17-year-old Jude Bellingham are all included in the current squad. Three of the six, of course, did previously play for Ireland.

The hope is, in these situations, that they all end up where their heart is but there is clearly some calculating to be done. Kenny reinforced the notion this week that Leeds striker Patrick Bamford, who played underage football for both countries, is holding out now for a senior England cap. On current form, he must be in with some sort of shout although there are only so many places for out and out strikers these days and Harry Kane looks like being around for a while.

Such are Gareth Southgate’s options, indeed, that the English striker with fractionally the best numbers in the Premier League this season, Jamie Vardy, is being allowed to use the international break to rest up. Bamford might yet be left to wonder what he missed out on just as Grealish might still just speculate the odd time on how many caps he would have won with Ireland by now. Two certainly doesn’t seem a great return on his talent.

Southgate has suggested that the absence of a crowd from Wembley will probably take a little of the pressure off the Aston Villa midfielder but a lot else will be lost too. The underlying resentment that many fans feel in cases like his or, to an even greater extent, Rice’s, seems to provide a good portion of whatever makes the fixture special when tensions related to the violence and political situation in the North have eased.

Aaron Connolly was at pains before he was forced out of the squad through injury to make clear that the game was important to him – because playing for Ireland always is – but there was a hint of bewilderment in his reply when he was asked whether he had grown up dreaming of walking out at Wembley. He admitted that he simply didn’t understand some of the issues dating back to before he was born that have served to shape the rivalry.

Grealish and Callum Robinson, who were friends from the age of eight, used to play a form of knockabout game in back gardens and parks specifically called ‘Wembley’ because it was their dream to play there one day, according to their former team mate Jordan Graham in a piece with The Athletic.

It seems strange that that might have been a dream that Robinson would have been fulfilling while playing for Ireland but there are certainly managers who would have been happy to have used the prospect in a sales pitch if they thought a player who could be useful might come on board.

Ireland have done well out of the process, in any case, with just over 100 players born in Britain, including many of our most celebrated, who have played at this stage for the Republic of Ireland. That’s roughly 20 per cent of the total number of Ireland internationals over the past 100 years and around 40 per cent since the 1970s when it started to become common place.

The English FA has clearly sought to push back against rivals’ use of the process in recent years and this game is a stark reminder of the way the rules of engagement have shifted. Rice making his switch after playing three senior games for Ireland shows just how imperfect the rules still are but the 21-year-old is hardly to blame and, as the relentless search continues for the new ‘next big thing’ who is eligible to play for Ireland, neither the FAI nor anyone urging them has any real cause for complaint.