Coutinho pulls the strings as Liverpool ease by Everton 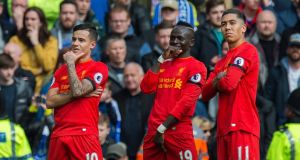 Liverpool strengthened their grip on Champions League qualification by effectively ending the top-four aspirations of Everton, whose woeful run in Merseyside derbies continued.

The Blues have not won at Anfield since 1999 — their last victory of any sort in the cross-city encounter was almost seven years ago — and despite lofty ambitions going into the game they never looked like actually ending that sequence.

First-half goals from Sadio Mane and Philippe Coutinho, sandwiched between a debut equaliser for Matthew Pennington, were followed by substitute Divock Origi’s clincher to make it 3-1 as Jurgen Klopp extended his 100 per cent derby record to three wins, the only manager in the club’s history to do so.

The six-point gap which had given Everton, who had lost once in 12 matches since the December derby at Goodison Park, optimism before kick-off now looks an insurmountable one.

Ronald Koeman, whose argument with Republic of Ireland boss Martin O’Neill over the treatment of James McCarthy saw him sign off his Twitter response ‘From the master tactician’, was forced to switch to a back three after injuries on international duties but it never looked coherent.

Mane took immediate advantage, starting how he finished at Goodison where he scored an added-time winner, with a superb individual effort after just eight minutes.

Having exchanged passes with Roberto Firmino close to halfway the Senegal international set off on a diagonal run which had defenders backing off enough for him to steer a left-footed shot across Joel Robles, who by favouring his near post left a lot of room to his left.

The Everton goalkeeper was almost further embarrassed when he palmed Coutinho’s shot up and onto the crossbar, a warning Everton did not heed when the Brazil international once again cut back onto his right foot to curl a shot inside the same post on the half-hour.

In between Pennington, on his first appearance of the season, had scrambled home Everton’s only shot on target in the first half after Liverpool failed to deal with Leighton Baines’ corner.

The visitors were fortunate to get the interval with 11 men on the pitch as a pumped-up Ross Barkley somehow managed to escape a caution until the 39th minute when, after two previous reckless challenges, he was lucky to only see yellow having gone over the top on Dejan Lovren, back in the side for the first time since the end of January.

Defender Ashley Williams may yet face retrospective action, however, after appearing to stand on Emre Can in an earlier tussle in an encounter which had the sort of feistiness associated with a fixture which has witnessed 21 red cards in 49 previous Premier League meetings.

Mane’s departure to a potential knee ligament injury early in the second half was a major blow for the hosts but any respite for Everton was short-lived as his replacement Origi swept home Liverpool’s third with a first-time shot from Coutinho’s pass less four minutes after coming on.

Liverpool seemed content with their lead so Everton were given a touch more freedom but teenager Dominic Calvert-Lewin had their last chance and should have done better with his close-range header after Simon Mignolet did well to parry Mason Holgate’s deflected shot.