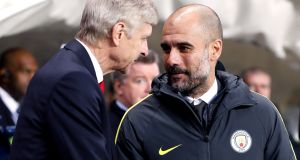 The long-serving Wenger’s position has been the subject of intense speculation in recent weeks with his side having lost six of their past nine games.

There have been numerous fans protests against Wenger and pressure has increased following the publication of a survey by the Arsenal Supporters Trust (AST) indicating a further lack of confidence in the Frenchman.

The prominent fans group recently canvassed its 1,000 members and 78 per cent of respondents said they had lost faith in Wenger. When a similar poll was carried out 18 months ago, the 67-year-old received 84 per cent backing.

Manchester City manager Guardiola, however, believes Wenger can turn the situation around.

Speaking ahead of City’s Premier League trip to the Emirates Stadium this weekend, Guardiola said: “All the managers want to win. It’s simple like that. We are strong when we win, we are weak when we don’t win.

“When he goes back to winning, the fans will be happy again. I promise you, 100 per cent.”

Wenger is yet to announce whether he will sign a new contract beyond the end of this season with the Gunners, despite recently revealing he had made a decision.

Guardiola has no doubt he has the ability to continue and could extend his two-decade tenure.

The Spaniard said: “People should understand how difficult football is today, all the teams are more prepared. When the bosses decide, or Arsene decides, to stay and keep going he believes it is the best solution and the best for Arsenal.

He said: “You cannot stay, I don’t know how many years Arsene has been in charge of Arsenal, without ability.

“Here a friend of mine, [assistant coach] Mikel Arteta, who was with him for a lot of years, only has good words about Arsene. I believe more in that.

“Managers lose games. He’s been there a long time because he’s good.”

Arsenal’s slump has seen them slip to sixth in the tight battle for Champions League qualification but Guardiola denies it is a good time to face them.

He said: “When you lose a lot of games it is a dangerous moment to face them. I would prefer to face Arsenal after a lot of wins.”

Meanwhile, Wenger has refused to blame Arsenal’s poor run on the uncertainty over his future, claiming it would be an “easy excuse”, insisting the speculation regarding his future is having no impact on his players, despite such a poor recent record.

“It would be an easy excuse and I could be out of contract and I am at the end of the season and still perform,” he told Sky Sports News. “For me whether I stay three years or 10 years I have exactly the same commitment and the same desire to win the next game. “I believe as well we are in the position where we do not have to find easy excuses. Our job is to perform — can you perform despite that?”

Wenger has called for his players to “be men” and concern themselves more with performances on the pitch rather than any uncertainty off of it. “I personally believe that, to be professional, is to perform on a football pitch and not look for excuses that are not real problems outside the pitch,” he said. “The situation is not sorted out and I believe at the moment we probably focus on what is essential. “My attachment to this club, at the moment it is as it is and I do not see any escape route to have less responsibilities because I might not be here. We have to be men and focus on what matters and what is our job.”

Wenger will be the subject of further demonstrations this weekend. The Frenchman continues to divide opinion among fans – aeroplanes carrying unfavourable and supportive messages were flown prior to a game a fortnight ago - but the AST survey perhaps indicates just how strong feelings now are in some quarters.

“The bond between the club’s longest-serving manager and the fans has, until recently, remained strong,” AST board member Tim Payton told the London Evening Standard.

“Sure, many grew frustrated with aspects of his management and called for change but only now do a majority believe it is time for him to go.”