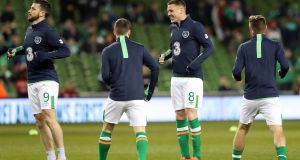 James McCarthty pulled out of Ireland’s World Cup qualifier against Wales after injuring himself in the warm-up. Photograph: Ryan Byrne/Inpho

Ireland manager Martin O’Neill has called Ronald Koeman the “master tactician of the blame game” after the Everton manager’s claims that James McCarthy was not protected during the recent international break.

He also said that the Dutch manager and his medical staff should consider looking at themselves before criticising others.

McCarthy pulled out of Ireland’s goalless draw with Wales last Friday after injuring himself in the warm-up. This was the latest setback in what has been a frustrating season for the 26-year-old midfielder, and Koeman then claimed – in a prepared statement during his press conference on Friday afternoon – that McCarthy was not fit to feature at the Aviva Stadium, despite being named in O’Neill’s starting line-up.

But on Friday evening the Ireland manager responded via an FAI statement, saying that Koeman had “struck out in his comments” while giving examples of when he felt McCarthy had been overplayed by his club.

“James had a magnificent tournament for the Republic of Ireland last summer during Uefa Euro 2016, playing his last game in late June,” O’Neill said.

“He then returned to Everton after a very short break, but only 11 days later he played his first of three games, all within an eight-day period, against Real Betis, Manchester United and Espanyol. Overloading?”

Koeman had earlier said that he and Everton had made it clear to Ireland’s management that McCarthy was carrying an injury before he joined up with his international teammates.

He said: “James had an injury when he reported for Ireland duty last week . . . Everton’s medical team advised serious caution, not only due to the current injury but due to previous injuries too.

“The assessment by the Ireland medical team was that it would be high risk for James to play against Wales.

“But of course James, as a strong [person] decided to play for his country, so when asked if he was fit to play he said he felt he was, and he was selected to start the game by the Ireland manager who, in my opinion – in this instance – was not protecting the player.”

However, O’Neill also responded to those claims, pointing out that the midfielder has not played for Ireland since October 9th, 2016 and that, since then, he has been totally under Everton’s supervision.

O’Neill continued: “James is diligent and conscientious in his professional preparation.

“Perhaps, in this instance, quiet introspection may serve the Everton manager and his medical staff better.”

McCarthy has repeatedly found himself in the middle of a war of words between Koeman and O’Neill this season. On Thursday an FAI source rejected claims O’Neill had ignored the advice of FAI medical staff in a bid to start McCarthy against Wales, describing them as “completely and utterly untrue.”

But on Friday Koeman reiterated his stance that he believed McCarthy was not fit to feature in the Group D clash, adding: “Clearly, James was not fit to play. He trained only for two days with Ireland and he broke down during the warm-up.

“All these circumstances, he has played only one game since the start of 2017. He did not play for three weeks before the Wales game. In my opinion he would need at least one full week of training sessions with the team to be declared to be fit.

“I spoke to James and said you need to take responsibility of this, but it’s not the first time.”

And Koeman, whose Everton side currently lie in seventh position in the Premier League table, said he was far from shocked at McCarthy’s latest problem: “I’m not surprised but yes, disappointed.”

Meanwhile, Stoke City manager Mark Hughes has played down Glenn Whelan’s clash with Joe Allen during the 0-0 draw in Dublin. The club teammates had to be separated after Whelan appeared to elbow Allen moments before half time in Dublin, but Hughes has laughed off any suggestion of a rift between the midfield duo.

Speaking ahead of Stoke’s trip to play Leicester on Saturday, he said: “It was hardly a row, was it? There’s no issue. It’s something of nothing really.

“When I was playing, I would kick my granny if she was on the opposition. They are team-mates who enjoy each other’s company, but they were playing for their countries and wanted to win.

“It happens time and time again and there’s no issue whatsoever. We see it on training grounds as well. They were together yesterday chatting.”