Brendan Rodgers impressed by his Celtic players on international duty 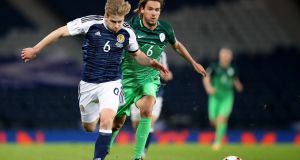 Brendan Rodgers revealed that he urged Stuart Armstrong to simply maintain his Celtic form during his Scotland debut against Slovenia last weekend.

The 25-year-old midfielder was rewarded for an outstanding season with the Hoops when national team boss Gordon Strachan pitched him in for the crucial 2018 World Cup qualifier at Hampden Park.

A 1-0 victory kept qualifying hopes alive and Armstrong returned to Celtic Park, along with Scotland team-mates Craig Gordon, Kieran Tierney, Scott Brown, James Forrest and Leigh Griffiths, to prepare for the trip to Tynecastle on Sunday where victory over Hearts will clinch the club’s sixth successive Ladbrokes Premiership title.

“I was delighted for Stuart,” said the Parkhead boss.

“I sent him a message before the game telling him not to think any more or less and not to prepare any more or less than what you always do. Don’t over-think it. Just go and play your game and go and work well.

“I said a few months back, he’s got all the ingredients for the top level with his technique and his physicality. He’s become mentally stronger and coping with the pressures of playing at a big club and obviously ultimately international level as well.

“Tactically he’s playing in different systems, he’s becoming more flexible and his knowledge of the game (is better) and that allows you to perform at a higher level.

“So I thought he was outstanding. There were areas of his game he could have been better in but overall he’s delighted with how the week went.”

Rodgers was also pleased at the way 19-year-old left-back Tierney performed after being asked by Strachan to switch to right-back.

The former Swansea City and Liverpool boss said: “Young Kieran is a top-class performer and he’s going to grow into one of Europe’s best full-backs, there’s no question about that.

“It’s much more difficult for a left-back to move over to the right than it is for a right-back. You see a lot of right-backs can play left-back.

“For Kieran to move across and play with reasonable comfort and to be as aggressive, it shows you the career the boy has in front of him.

“He’s a wonderful young talent, very determined, very hungry and I’ve seen big improvements in him since I first came in. He just needs confidence in his ability on the field.”

Rodgers’ first league game as Celtic boss after taking over from Ronny Deila was in a 2-1 win at Tynecastle last August.

Asked what a title win would mean to him in his first season in the job, he said: “It will be a huge honour for me in relation to taking the club in my first year here to the title.

“We are coming off the back of five titles before that. Neil Lennon and Ronny Deila did fantastic and of course we wanted to continue with that.

“I said when I came in that my job was to win it in the best way we possibly could.

“You can win something and it is not the same feeling but if you win and foster the spirit that you have here, this club can make it really special.

“For me, to share that with the players and the coaching staff and everyone at the club, to make everyone a champion, of course, will be really special.”