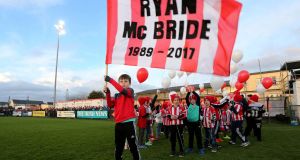 Members of the Derry City FC Cubs who released balloons in memory of club captain Ryan McBride prior to kick off. Photo: Lorcan Doherty/Inpho

But it was two superb first half goals from the seasiders which placed the home lot on the back foot after what had been an emotional start to a game.

The family of the 27-years-old centre-back were in attendance as both sets of players wore No. 5 T-shirts onto the pitch, with the Derry under-19s combining to form a giant figure of five on the pitch before kick-off.

The club’s City Cubs then released red and white balloons into the sky minutes before the game kicked-off.

Gary McCabe’s curling free-kick in the 28th minute was guided low into Ger Doherty’s net from 20 yards for the opening strike.

The second strike, one minute before the break, saw Aaron Greene take full advantage when racing clear to take control of a lofted clearance before driving a powerful left foot shot across the body of Doherty to double his side’s lead.

Amazingly, it was Derry who had bossed the ball but the home lot failed to capitalise on decent changes during the early stages of the first half.

Top hitman, Rory Patterson, who made his first appearance of the season, had three quality chances to break the deadlock but while he failed to hit the target on two occasions, he was denied by a top drawer save from Peter Cherrie in the 15th minute.

Making matters worse was the fact that Patterson’s return lasted just 31 minutes, the striker limping off with a calf problem.

However Derry pushed on and their pressure finally paid off in the 65th minute when they were awarded a penalty. Cherrie made another superb block but as McEneff attempted to follow up he appeared to have been impeded by a defender and referee pointed to the spot.

McEneff coolly crashed the ball home to give the big crowd a great lift with 25 minutes remaining.

Content to defend deep, Bray lived a charmed life but they could so easily have put the game to bed in the 70th minute but John Sullivan’s downward header was directed into the hands of the Derry keeper.

With 14 minutes remaining, Derry’s Ronan Curtis really should have restored equality with only the keeper to beat, but he dwelt too long on the ball allowing Conor Kenna in to dispossess him at the vital moment.

Derry then equalised in the 84th minute when defender, Dean Jarvis, was sent scampering clear by Nicky Low and as the defender raced into a one-on-one situaton with Cherrie, Jarvis expertly lobbed the ball over the keeper’s head for a fine equalising goal.

However, it was Bray who had the final stay in the 92nd minute when Tim Clancy headed the ball home following a corner a strike which saw the Candystripes lose their unbeaten record.

Conan Byrne scored a spectacular goal to help St Pat’s to all three points from this cracking game at Dalymount Park.

Already leading through Christy Fagan’s strike on 38 minutes, Byrne doubled Pat’s lead on 45 minutes. He struck a brilliant effort from just inside his own half and with Bohs goalkeeper Shane Supple off his line, the ball flashed high over the stranded number one before nestling in the back of the unguarded net.

Byrne added a third on 47 minutes when he stole the ball from Lorcan Fitzgerald and finished well into the bottom left corner. Kurtis Byrne volleyed in a fourth in injury time.

With full debuts for teenagers Sam Bone (18) and 17-year-old striker Dean Dillon, Rovers started energetically in a 3-5-2 formation, racing into a 2-0 lead inside 14 minutes.

David McAllister put them in front just two minutes in with a cracking drive from some 30 yards that rattled in off the underside of Ciaran Gallagher’s crossbar.

Skipper Ronan Finn doubled that lead with another stunning right-footed strike from distance in off the keeper’s near post.

Harps enjoyed plenty of the ball throughout the second half, pulling a goal back on 71 minutes.

Sean Houston played Caolan McAleer in and the winger drilled the ball under Tomer Chencinski to the net.

But Rovers had the final say with a 90th minute winner.

Substitute Michael O’Connor got to the end line to cross. And when Harps failed to clear, Madden lobbed a delightful volley to the far corner of the net.