Juan Mata could miss rest of season after groin surgery 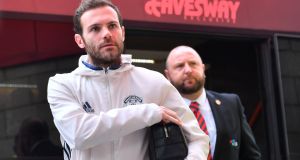 Manchester United look set to be without Juan Mata for the rest of the season after he unerwent groin surgery. Photo: Anthony Devlin/Reuters

Juan Mata’s season could be over after the midfielder underwent groin surgery on Thursday, in what is a sizeable blow to Manchester United’s hopes of a top-four finish.

The 27-year-old has played a pivotal role in United’s 18-game unbeaten Premier League run, his four goals second only to Zlatan Ibrahimovic’s 11 since José Mourinho’s side were beaten 4-0 at Chelsea on October 23rd.

On Friday evening United confirmed Mata’s injury, stating: “Juan has had surgery for a groin injury [on Thursday]. Further updates on his recovery will follow in due course.”

United are fifth after the 3-1 win over Middlesbrough before the international break and face West Bromwich Albion at Old Trafford on Saturday. While they are four points behind fourth-placed Liverpool with two games in hand, Mata’s probable long lay-off gives Mourinho an injury headache.

Paul Pogba is out due to a hamstring strain and Phil Jones, who has a toe injury, and Chris Smalling, sidelined by a knee problem, will not be available again for some time, the manager indicated.

“I think clearly the two English boys are long-term injuries and Pogba I have no idea,” Mourinho said. “We know what happened in the English national team with Smalling and Jones [where they got injured], we know that we have also Pogba injured. But the important ones are the players that are ready to play, I trust and are going to fight for us.”

The 20-year-old midfielder Matty Willock could be included in Mourinho’s squad due to the injuries and Bastian Schweinsteiger’s departure.

Ibrahimovic and Ander Herrera are suspended for West Brom’s visit and Mourinho is urging those players who are fit to be ready even if they feel a minor malady.

Given the league position, with Arsenal only two points behind, Mourinho is conscious United have to keep winning or by the time they play Chelsea their only route into the Champions League may be through winning the Europa League.

“We want every match to be important until the end of the season and if we manage that, to be in the run-in in the two competitions, the boys have to be very resilient, very strong physically, they have to cope with everything like they did in that week against Rostov, coped with the bad pitch, they coped playing against Chelsea, coped with playing against Rostov three days later.