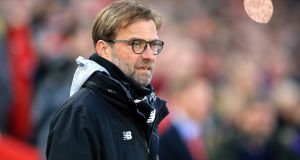 Jürgen Klopp has said Liverpool do not feel under pressure against Everton despite describing Saturday’s Merseyside derby as the most important of his Anfield reign.

Klopp is the only manager in Liverpool’s history to win his first two derbies having overseen a 4-0 destruction of Roberto Martínez’s side last season and a 94th-minute victory at Goodison Park in December. “Maybe I’m a genius at understanding derbies because I didn’t need a second to understand the importance of this game,” he said. Since Sadio Mané’s stoppage-time goal at Goodison, however, Everton have closed the gap on Liverpool and enter the 228th Merseyside derby as the in-form team in the Premier League this year.

Liverpool have seen a 16-point lead over Ronald Koeman’s team reduced to six since January 1st and Manchester United close to within four points with two games in hand in the pursuit of a top-four finish.

Klopp admits Liverpool’s position and Everton’s momentum have increased the importance of their latest confrontation but insists the pressure will not affect his players. “It is opportunity, not pressure,” the Liverpool manager said of the derby. “I know what happens around them but what I have learned is that it helps a lot if you don’t think too much about the pressure in games like this. It is a big opportunity. We all know how important it is for everybody.

“The pressure is always there and we are under pressure because of different things but that is a normal part of life. I really see it as an opportunity in the right way, so go into a game like this really positive, we need to be really aggressive but in the way of being positive aggressive. Not that we want to show that we are ready to make crazy challenges or whatever but that we are ready to hurt ourselves.”

Klopp acknowledged that his third Merseyside derby will be the most significant of his Liverpool reign so far. He said: “That is another factor. We can all read the numbers but I don’t remember one game that wasn’t important this season. Last year I have no idea about the situation in the table but I remember Everton was under a little pressure. My colleague was sacked a few weeks later.”

Liverpool are still without Daniel Sturridge and Jordan Henderson due to injury, with the captain suffering a setback in his recovery from a foot problem that will keep him sidelined for an indefinite period. The in-form Adam Lallana is also unavailable having suffered a thigh injury on England duty. “I wasn’t happy about him playing on the Wednesday but I 100 per cent respect the other manager’s decision,” said Klopp of Gareth Southgate’s use of the attacking midfielder.

Philippe Coutinho and Roberto Firmino arrived back from Brazil’s World Cup qualifying win over Paraguay only on Wednesday but Klopp believes any fatigue will be secondary to their joy at securing a place in Russia next year. The Liverpool manager also revealed he had been contacted by Brazil’s coaching staff over how best to utilise Firmino, with the coach, Tite, handing the striker the central role he enjoys at Anfield.

Klopp explained: “Tite obviously likes the way we play and we have had a few conversations, not with him personally because we have language issues but there is a guy in his staff who speaks English. We had a lot contact and he likes the way we play and I am not 100 per cent sure but I think he wants to do something similar. Roberto didn’t score but he opened nearly all the situations for Brazil. When I saw them I thought they would look tired but they weren’t. There was a really big smile on their faces. From the mental side it is a big thing to be already through from a very difficult qualifying group.”

Koeman, by contrast, endured what he described as “maybe one of my worst international breaks” after losing Seamus Coleman and Ramiro Funes Mori to season-ending injuries plus James McCarthy to another hamstring problem that could sideline the Republic of Ireland midfielder for six weeks.

The Everton manager insisted he is unafraid of the potential disruption to his team’s momentum and believes the derby, plus Tuesday’s trip to Manchester United, offers “the possibility to make a good season a special season”. But he condemned the impact of the latest international break on both teams’ preparations for the derby.

“It has happened to us now but it happens to other Premier League teams where you get your players back on a Friday morning and play on a Saturday with a 12.30pm kick-off,” said Koeman.

“We and Liverpool are in the same position. That’s crazy. You get the players back after 10 days and have one training session before a game, and not even a real training session because [Enner] Valencia didn’t get back until Thursday evening. You can’t prepare as you would like to do. It is recover, recover, recover and for tactics you can only talk to the players on the pitch. We did a walking session. It’s not training.”

Koeman, who has allowed Tom Cleverley to complete a permanent transfer to Watford, also aimed a dig at Martínez by claiming Everton’s tactics were wrong against Liverpool last season. “The team is stronger and has a different mentality, more aggression and more of the intensity that you need to play against Liverpool but you need to show it,” he said.

“They were not afraid exactly [last season], but afraid to play in a certain way. You know Liverpool will press and be aggressive and maybe Everton were not in the best way prepared for a game with that type of football. What we did at home, we went face-to-face and maybe 98 minutes was too long but that was a good impression of how I like to play and how we need to play against Liverpool.”