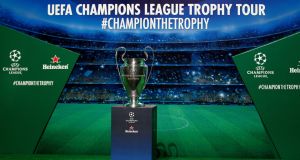 European leagues are now free of their obligation to keep Champions League and Europa League nights clear of domestic fixtures.

In principle, there is now nothing to stop domestic leagues arranging fixtures to be played at the same time as Champions League and Europa League fixtures.

The EPFL will hold a general assembly of its member leagues in Geneva on June 6th to discuss the matter further, while the group stated again on Friday that it has “serious concerns” about Uefa’s plans for the 2018-2021 European competition cycle.

European football’s governing body announced last year that from the 2018-19 season four Champions League group-stage places each would be guaranteed to England, Spain, Italy and Germany, which would mean half the 32 places in the lucrative group phase being filled by clubs from just four countries.

But it is not just the diminished access to the competition which concerns the EPFL. The group’s deputy general secretary Alberto Colombo said negotiations with Uefa will also look at overall revenue distribution and the “constant diminution” of solidarity payments in real terms, when set against the increased revenues being received.

Scheduling domestic matches at the same time as Champions League and Europa League matches could affect attendances and television viewing figures for the Uefa club competition matches, but would also likely have a similar affect on domestic competitions, and Colombo admitted it is “in the interests of both parties” to avoid such clashes where possible.

Any such clash could also adversely affect the value of the rights to broadcast matches, as well as advertising and sponsorship revenue.

Uefa president Aleksander Ceferin was elected after the decision to protect the position of clubs from Europe’s top leagues had been taken. He drew his support from smaller associations within the European confederation who felt they had become marginalised. Colombo said of Ceferin: “We are confident he is listening to us.”

Colombo said his organisation was most concerned with protecting the competitive balance within domestic leagues, and that the impact of Uefa’s decision was “like a snowball rolling” in making the gap between the richest and poorest clubs an impossible one to close.

“The beauty of football is the unpredictability of results. This is something that is fundamentally important for us,” Colombo said.

“We are looking at the long-term sustainability of the game. If this is going to distort the competitive balance of the leagues, in the long term this will be detrimental to the business interests of the leagues.”

The EPFL said in a statement on Friday: “The leagues reiterated their serious concerns with respect to the reform of Uefa’s club competitions for the cycle 2018-2021 and its detrimental impact on the competitive balance of domestic competitions and on the development of professional football as a whole.

“The EPFL’s goal is to enhance and protect competitive balance in league competitions in the interest of all its member leagues and the vast majority of professional clubs and national associations in Europe.

“The memorandum of understanding between EPFL and Uefa formally expired on March 15, 2017. This will give all European leagues total freedom to schedule their matches as they see fit – including on the same days and at the same kick-off times as Uefa club competitions.

“Due to these historical circumstances, the EPFL is now calling for the very first time an extraordinary general assembly that shall take place in Geneva on Tuesday, June 6, 2017.”

The EPFL said it will “keep negotiating” with Uefa on calendar matters in the lead-up to the meeting. Uefa did not wish to make any comment on the matter.