Pride returns to Parkhead as Celtic's Lions are remembered 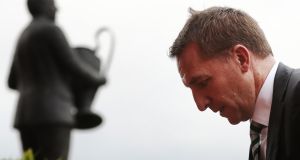 Brendan Rodgers outside Celtic Park, with the statue of European Cup-winning manager Jock Stein in the background. Photograph: Getty Images

It was the last day of the season and the Scottish league title was still on the line. There were two contenders for the trophy and those two met. It was at Tynecastle, home of Hearts.

The visitors, unlikely as it sounds now, were Kilmarnock. Mathematics dictated that the Ayrshire team had to win 2-0 to take the title and they did just that. It was 1965 and Scotland’s champions were Kilmarnock.

Fast forward to this Sunday and Tynecastle is again expected to host visiting champions.

That is where the similarities with 1965 stop. This time the travelling club is different – Celtic. This time so much of Scottish football is different.

Celtic will arrive in the maroon quarter of Edinburgh knowing a win will see them crowned champions on the second day of April. So there will be no last-day tension.

This is a green procession. Celtic went into the international break 27 points clear, having won 27 of their Premiership matches and drawn two. To Celtic devotees Brendan Rodgers’s first season at Parkhead is turning into something special.

Having already won the League Cup, Celtic are in the semi-final of the Scottish Cup. They are yet to lose a domestic match in Scotland under Rodgers, with seven cup ties to add to the 29 unbeaten league games.

A Treble is realistic – a first Celtic Treble since Martin O’Neill’s in 2001 – going the full season unbeaten is realistic, and at a moment when Celtic are preparing to celebrate the 50th anniversary of the Lisbon Lions, no wonder the club as well as the man from Co Antrim are smiling.

Tynecastle will hardly wish to facilitate a Celtic coronation, but the venue is not the only reason to dwell on 1965. The seeds of Lisbon ’67 were sown two years earlier, when Jock Stein returned to the club he had played for as the new manager.

It is inconceivable now but, that Kilmarnock season, Stein was re-joining Celtic with the team about to finish eighth. Rangers were fifth.

It was a period of Scottish variety. The 1960s began with Hearts claiming a second title in three seasons, in 1962 Dundee won the league for the first and only time, and while Rangers took their 33rd title in 1963, Kilmarnock were second, Partick Thistle were third.

Of course Celtic and Rangers were dominant in terms of scale, but there was competition on the pitch. Scotland was a vibrant football scene. In fact, in the 19 postwar seasons to 1965, Scotland had seven different champions – Rangers, Hibs, Celtic, Aberdeen, Hearts, Dundee and Kilmarnock.

Stein’s talent was transformational. He turned Scottish variety into Celtic monopoly. From 1966 Celtic won nine league titles in a row.

It was a feat Rangers were to match between 1989 and 1997, by which time variety was dead.

In the 51 seasons since that Kilmarnock day at Tynecastle, only two clubs beyond Celtic and Rangers have won the title – Aberdeen and Dundee United, and the last of those was Aberdeen’s 1985 league win. Since Alex Ferguson left Pittodrie there have been 17 league titles for Rangers and 14, soon to be 15, for Celtic. Scotland is not vibrant.

This is the domestic context for Rodgers and Celtic and it is not mean-spirited to say so. It is the reality of Scotland 2017.

When Stein returned to Parkhead in 1965, Celtic had not been champions since 1954. When Rodgers arrived at Celtic a fifth consecutive title had just been won, at a time when Rangers are yet to recover from self-sustained economic catastrophe.

In the window of the Celtic shop on Belfast’s Ann Street there is a giant, magnificent colourised photograph of Billy McNeill. Looking every inch a Caesar, McNeill is leading out his team-mates at the Estadio Nacional in Lisbon on May 25th, 1967. Diehard Celtic fans swoon at such images, understandably so.

Over the course of the past 10 months they have begun to show some similar affection towards Rodgers. The Irish man has been a restorative influence among a tiring, questioning fanbase.

Rodgers has restored Celtic’s authority on the pitch and in turn he has made fans feel better about themselves. Cosmetically the walk up to Parkhead has been made more attractive and that also works as a metaphor.

Considering the level of Scottish opposition, its poverty financially and sporting, it might be said this is a given.

A league title was won under Deila, true, but the Norwegian was underwhelming, Celtic were underwhelming. Neither fully recovered from the early Champions League exit against Malmo at the qualifier stage. In the Europa League, Celtic were out before Christmas, losing home and away to Molde. This came after the Legia Warsaw and NK Maribor red-faced experiences the summer before.

Celtic’s support is aware of the state of the game domestically, but to be pushed to the fringes of Europe hurts.

A general dissatisfaction settled. Less than a year ago this led to banners at Parkhead declaring: “From boardroom to dressing room you’ve embarrassed yourselves.”

And: “The Celtic jersey has shrunk to fit inferior players.”

Rodgers’s achievement has been to reverse that shrinking feeling. There is a swell of pride in the jersey, timely with the big anniversary coming.

Rodgers contributes a foreword to a new club book on the Lisbon Lions in which he writes: “Coming here, the job is to dominate Scottish football, and also to return and restore Celtic’s name and the pride of Celtic back in Europe.”

When, in his first match in charge, Celtic lost in Gibraltar to a club called Lincoln Red Imps, pride and Europe were not being used in the same Celtic sentence. Some of the scepticism around Rodgers, which chased him out of Liverpool, swirled.

But, unlike under Deila, Celtic did reach the Champions League group stage. Glamour and money were back and although the opening game at Barcelona ended in a depressing 7-0 defeat, it was 1-0 when Moussa Dembele missed a penalty.

A thrilling 3-3 draw with Manchester City followed and if Celtic finished bottom of the group, they were beaten but not humiliated. The manager received praise and understanding.

Dembele’s £500,000 signing from Fulham had boosted Rodgers’s credibility in Glasgow. Dembele was 19 when he joined and has 32 goals, including a hat-trick against Rangers in the first Old Firm league derby for four years.

At other ranges on the age scale, Rodgers brought 35-year-old Kolo Toure from Liverpool for zero money and returned to 27-year-old Scott Sinclair, signed from Aston Villa for £3.5 million.

Rodgers had first worked with Sinclair as a Chelsea youth coach, he then bought him as Swansea City manager – Sinclair scored a hat-trick in the 2011 playoff final that took Swansea into the Premier League.

Rodgers’s reputation then was as a skilful developer of talent on a budget, allied to a pleasing playing philosophy. In a way Swansea is more relevant to his work at Celtic than the three-and-a-half years at Liverpool. Fans, for example, wallowed in Celtic’s 11-man effort at St Johnstone in February, a fairly Swansea type of goal.

Rodgers was 37 when he moved to Wales, having been sacked by Reading in 2009. The pain was extra because Reading is the club the Carnlough teenager joined back in 1990. Retired through injury at 20, Rodgers took to coaching in an era when, as he explained recently: “There weren’t many jobs in football.”

“I always wanted to coach but I had a family and I had to provide for them. So I got a job with John Lewis in their main warehouse in Bracknell while I was doing my coaching badges. I’d be up at five o’clock in the morning and doing a 12-hour shift, five days a week, and after that I went coaching. I knew what I wanted to do.”

After Reading – and Liverpool – what Rodgers wanted was a club where he would fit “hand in glove”.

He used that phrase sitting in the broom cupboard that doubled as his office at the Neath health club Swansea operated from. After only 10 months it could be used of him and the institution that is Celtic.

Rodgers has had ups and downs but he and Celtic have proved a good fit. That will not prevent speculation about a 12-month rolling contract and what comes next for Rodgers, but for this weekend what he said about Liverpool earlier this season could apply: “My memory will always be that I made the people happy there – for a period of time.”

Tynecastle expects to witness something familiar and also a first. While Scotland may never get back its competitive past, Celtic have got back some needed pride.