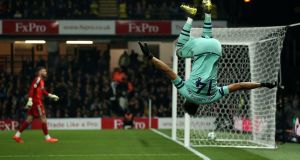 It was a frantic and full-bloodied affair and for Troy Deeney, the night when his fondness for speaking his mind well and truly came back to haunt him. It was after this fixture in October 2017, that the Watford captain claimed he liked to “whack”Arsenal’s players in order to see which one of them “wants it.” Well, 18 months on Deeney did give one of them a whack and he was sent off for his troubles.

The flashpoint arrived on 11 minutes as the striker delivered a forearm smash to Lucas Torreira’s head. The referee, Craig Pawson, immediately pulled out his red card, which caused shock among the home supporters and great glee among those in the away end. For Deeney it was also some comedown after his part in Watford’s incredible FA Cup semi-final victory eight days ago.

For Javi Gracia’s men there was also the setback of a defeat that harms their chances of finishing seventh while for Arsenal came three points that moves them up to fourth. Victory was secured moments before Deeney was dismissed thanks to a moment of expert opportunism by Pierre-Emerick Aubameyang and represents Arsenal’s only third away from home in their last 13 games in all competitions.

With such a short turnaround between last week’s Europa League victory over Napoli and the return in Italy this Thursday, Emery was always going to make changes for this contest, and there were six in total, with the most eye-catching being the deployment of Konstantinos Mavropanos in a defence lacking his fellow Greek, Sokratis Papastathopoulos, through suspension.

The 21-year-old has made just one previous appearance this campaign having been dogged by a groin injury, and that as a 79th-minute substitute at Manchester City in February. Mavropanos has become Arsenal’s forgotten man but here he suddenly was.

The defender’s first contribution was a less than convincing one as he attempted to head the ball back to Bernd Leno only to miss the ball completely. That was the cue for the hosts, buoyed by their Wembley win and having not lost here since Christmas, to put their squeeze on their opponents. The pressing was high and aggressive and Arsenal appeared rattled. Cue surprise then when it was they who took the lead on 10 minutes.

It was a moment Ben Foster will not look back on fondly as his attempt to clear the ball following Daryl Janmaat’s backpass was charged down by Aubameyang from practically on the goalline. The ball smashed the side of the striker’s left boot and went in for his first away goal of 2019.

And things got worse for Watford less than a minute later as Deeney was shown a red card for the second time in his Premier League career. The call was made by Richard West, the assistant on the far side, who clearly saw the striker thrust his forearm into the side of Torreira’s head as he ran past the Arsenal midfielder. It was not the most violent of collisions but it was reckless and ultimately the decision of referee Pawson was the right one.

Down to 10 men Watford could have caved. Instead they appeared even more determined to wound their opponents. First Craig Cathcart forced Leno into a smart save and then, on 32 minutes, Etienne Capoue made the German work even harder to keep out his fizzing free-kick. Arsenal were being pegged back and forced to play on the counterattack, their numerical advantage not obvious to the naked eye. Meanwhile Deeney, continued to watch proceedings from inside the players’ tunnel.

For the visitors there was a need to get a grip on proceedings. As such, it was no great surprise to see Mesut Özil, in full away kit, being put through his paces during the interval. The German came on for Torreira and was stationed in an advanced midfield role, with Aaron Ramsey moved deeper.

Slightly altered, Arsenal controlled the early stages of the second half and would have scored again on 53 minutes had Aubameyang connected better with Alex Iwobi’s low cross. Four minutes later, Henrikh Mkhitaryan did get on the end of an Iwobi delivery only to see his side-footed shot brilliantly blocked by Foster.

Watford were now hanging on and just before the hour Gracia decided to make a change, bringing Isaac Success on for Kiko Femenia and changing to a 4-3-1-1 formation.

With Success playing just off Andre Gray, Watford found themselves exerting fresh pressure on their opponents and, on 62 minutes, they came close to equalising after Adam Masina hit a swerving long-range drive that appeared to be going in only for the ball to clip the top of the bar.

The hosts kept coming and went even closer to scoring 10 minutes before the end when Gray went around Leno and appeared set to put the ball into an empty net only for Ainsley Maitland-Niles, on as a substitute, to make a crucial sliding block. For Watford, there was no way through. – Guardian