Midfielder has made vital contributions to the cause in recent games 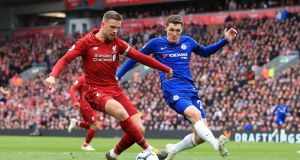 One of the hallmarks of great drama is when a previously unheralded character turns out to have a significant impact on the denouement that, in hindsight, seems inevitable.

Jordan Henderson may be Liverpool captain but, a fortnight ago, who really thought he might have a major say in the playing out of the title race – and that it would be positive?

Liverpool weren’t nervous exactly but five minutes into the second half against Chelsea on Sunday, they were perhaps just at the stage of thinking they needed a goal soon or they would start to become anxious. Manchester City’s victory over Crystal Palace meant they had to win, but playing into the wind howling over the Anfield Road End they had struggled for rhythm in the first half.

Then Mohamed Salah made an incursion and was checked. Never fear: there was Henderson bounding up in support. His first touch took him into space and the Kop bayed for him to shoot: no deft stuff, Hendo, please! But he didn’t. His second touch, at pace, was weighted perfectly to take him to the byline but not beyond, and his third chipped the ball to the back post where Sadio Mané couldn’t miss.

The 6 has become an 8 and, for a third straight fixture, he unlocked the game. It was a moment of pure, distilled Henderson;: an assist seeded in his enthusiasm but brought to fruition by a level of skill and technical control that often seems underestimated.

Two years ago the German photographer Christian Vieler brought out a book comprising studio shots of dogs as they tried to catch a chewy treat he tossed for them. Look at those pictures and look at Henderson under a high ball. The expression is the same. The same focus, the same desire, the same sheer wonderment to be alive in a universe in which such delights can drop from the sky.

In part, Henderson’s reputation has suffered because of his loyalty and his willingness to do what his master commands. When he first emerged at Sunderland, he was a right winger. Steve Bruce soon moved him into the centre but in his first game there, away at Birmingham, he was dreadful. Bruce kept faith and, marvelling at his willingness to learn, was vindicated as Henderson within a matter of weeks had established himself as a box-to-box player.

When Fabio Capello gave him his first England cap, in a 2-1 home defeat to France in November 2010, though, it was as a holder just in front of the back four. Henderson was awful, but the decision to play him there, a role he had never previously occupied, was mystifying. Henderson, though, overcame the setback and, given Harry Kane’s injury, could end up captaining England into the Nations League semi-final.

Signed for Liverpool as part of some misguided moneyballing under Kenny Dalglish, Henderson was very nearly sold by Brendan Rodgers. But he kept going and prevailed, because that’s what he does.

Jürgen Klopp needed him to operate as the deepest-lying midfielder – as what German football refers to as a 6, a convention Henderson, ever the diligent student, seems willingly to adopted.

Henderson did the job willingly enough, but it is not what he excels at. He does not have the instinctive positional sense of a Claude Makélélé or a Andrea Pirlo, a Sergio Busquets or a Xabi Alonso. When Liverpool pressed hard and constantly, his energy meant he could get away with it: pace and aggression were prioritised above precision.

This season, though, as Liverpool’s approach has become slightly more conservative, those tactical failings have been exposed. So Henderson, out of favour, his frustration apparent as he pointedly ignored Klopp on being substituted at Old Trafford in February, suggested he might be better on the right of the three, as an 8.

That is what he loves, being let off the leash so, eyes bright, tongue lolling, ears flapping, drool flying from his jowls, he can go chasing rabbits and smells and squirrels and, yes, balls wherever his enthusiasm may take him.

As Alex Ferguson once noted, there is something slightly odd about Henderson’s gait, which perhaps means he will never be the most graceful of players, that his mistakes will stand out and even his moments of genius can appear a little clumsy, but look at his impact.

Henderson came off the bench to turn the game at Southampton. It was his through-ball that cracked Porto open in the Champions League last Tuesday. It was his intervention that opened up Chelsea. He was relegated to the bench for England’s last game as well, but came on against Montenegro in that number 8 role to create the fourth and fifth goals with quick forward passes.

The result has been Hendo Unchained, and it may end up bringing Liverpool the title. – Guardian

1 Premier League to restart on June 17th - BBC reports
2 Dave Hannigan: Trump gets the clubs back out as death toll keeps rising
3 Philip Browne admits funding model for Irish rugby is not sustainable
4 Dr Bob Rotella: ‘If you focus only on the target you’ll play darn good golf’
5 October dates being considered for Irish Open at Mount Juliet
Real news has value SUBSCRIBE