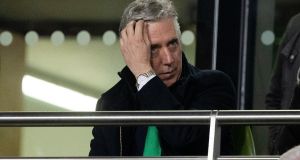 In the land of the endless yak, silence often says most. Almost an hour and a half into the appearance of Sport Ireland’s top brass in front of the Oireachtas Committee for Transport, Tourism and Sport, the proceedings came to a sudden stop as a straight question hung in the air. Imelda Munster, Sinn Féin TD for Louth, had asked four times whether John Treacy had confidence in the FAI board and three times so far, the Sport Ireland CEO had given it the swerve.

“Do you have confidence in them?”

“Well, I would like, when we ask questions of the FAI, that they would answer them . . .”

“As it stands, do you have confidence?”

“But do you have confidence in the board of the FAI?”

“Well, let’s put it this way. We have asked questions and we haven’t got answers and that raises serious concerns . . .”

“We all know there are serious concerns. The specific question is whether you have confidence in the FAI board. It’s a yes or no answer.”

John Treacy isn’t generally a studs-up kind of guy. Strange as it might seem to anyone who has followed John Delaney’s career, Treacy has always taken the approach that the CEO of a sporting body shouldn’t be in the news for very much beyond the nuts and bolts of the job at hand. Probably sounds mad when set against starring in your own self-aggrandising documentary but maybe he just lacks imagination.

So for him to strap on the knuckle-dusters gives a fair idea of how annoyed Sport Ireland are at the lack of an acceptable response to their questions about John Delaney’s €100k loan to the FAI. At one stage, indeed, he lamented the fact that the FAI’s latest foray into bespoke corporate governance had brought them here at all. “This is not a good day for sport,” he said. “We shouldn’t be in front of you talking about these issues.”

Treacy sat in front of the committee for four hours, flanked by Sport Ireland chairman Kieran Mulvey and Sports Programme Manager Colm McGinty. It became clear early on that the whole exercise was strictly a prelim, laying the groundwork for next week when the FAI - Delaney included - are due to appear. At one stage, when they were asked what action they were going to take against the FAI and when they were going to take it, Mulvey smiled and said: “To be honest with you, we’d like to see the outcome of your own meeting with them next Wednesday.”

On this evidence, the committee has bucked its ideas up somewhat since the last time Delaney appeared in 2017. The grandstanding hasn’t completely disappeared but their questioning was generally focussed and blessedly short - or shorter, at least - on repetition. The best questions came from the female TDs, with Munster, Catherine Murphy and Ruth Coppinger commendably unimpressed throughout.

“If you don’t regulate the FAI, who does?” asked Coppinger at one point, drawing an uneasy and unsatisfactory response from Treacy. “We protect our investment. It’s up to the board of the FAI to regulate it.”

“Did you ever think it was strange that the chief executives’ salary was higher than the Taoiseach?” was Coppinger’s follow-up, and again, Treacy had to submit that it was but that they could do nothing about it. “Yeah, we did. But that’s a matter for the board.”

“Their response has frankly been insulting to your organisation,” said Fine Gael’s Noel Rock in what passed for the closest anyone came to performative high dudgeon all day.

Battle lines drawn for next Wednesday, then. Remains to be seen how the FAI go about brazening this one out.

1 Gerry Thornley: Wild reactions to this Ireland team as fickle as the wind
2 Cheltenham keeping a watching brief on coronavirus
3 Dan Tuohy explains ‘rotten to the core’ comments
4 IRFU not consulted prior to Minister Harris’ recommendation to cancel Ireland v Italy
5 Five Golf Classics for you to tee up at in 2020
Real news has value SUBSCRIBE
Crossword Get access to over 6,000 interactive crosswords